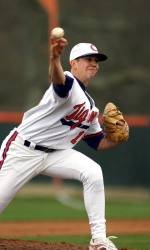 Notes Clemson went 0-4 in four games this past week, including falling at #14 South Carolina 7-1 on Wednesday before being swept by #4 North Carolina over the weekend.

James Darnell went 4-for-4 with two homers and five RBIs to lead South Carolina to a 7-1 win over Clemson at Sarge Frye Field on April 9. Phil Disher and Justin Smoak added long balls, as all seven of the Gamecocks’ runs came on home runs. Smoak went 3-for-4 with a double, homer, and three runs scored for South Carolina, who left just three runners on base. Meanwhile, starter Nick Godwin limited the Tigers to only four hits, one run, and no walks with eight strikeouts in 8.0 innings pitched to earn the victory. Doug Hogan provided Clemson’s lone run with a solo home run in the first inning.

North Carolina then swept Clemson by a combined score of 20-9 at Doug Kingsmore Stadium from April 11-13. The Tar Heels outhit the Tigers .339 to .213 and totaled 10 extra-base hits to Clemson’s four. The Tigers were just 4-for-28 (.143) with runners in scoring position, while the Tar Heels hit .429 with two outs. North Carolina’s pitching staff had a 2.67 ERA, as they stranded 30 Tigers on base in the three games. Mike Freeman paced Clemson by going 5-for-12 (.417), while Wilson Boyd added four hits.

In game-two on April 12, Kyle Seager hit two homers with four RBIs to lead North Carolina to a 4-3 victory over Clemson. Seager hit a three-run homer in the first inning after a costly Tiger error, then he hit a solo home run in the fifth inning. Clemson scored two runs in the first inning, highlighted by Boyd’s run-scoring double. Trailing 4-3 in the seventh inning, the Tigers had runners at the corners with no outs. But Clemson left the bases loaded after failing to bring home the tying run. The Tigers also had two at-bats with the tying run on second base in the ninth inning, but they came up emtpy both times. Clemson left 10 runners on base and was 0-for-10 with runners in scoring position.

In game-three on April 13, North Carolina pounded out 18 hits in its 8-4 victory over Clemson. The Tigers jumped out to a 3-1 lead in the bottom of the first inning, highlighted by Kyle Parker’s two-out, run-scoring double. Then with the Tar Heels ahead 5-4, they scored three runs in the eighth inning after the first two batters of the frame were retired. Clemson left the bases loaded in both the seventh and eighth innings, as the Tigers stranded 11 runners on base in the game. Every Tar Heel starter had at least one hit, while Freeman and Boyd paced the Tigers with two hits apiece. Six North Carolina pitchers combined to walk eight batters, but the Tar Heels did not allow a run after the third inning.

Freeman led the Tigers on the week by going 6-for-16 (.375), while Boyd added five hits. Graham Stoneburner allowed two earned runs in 8.2 innings pitched over his two relief appearances as well.

The pitching staff has a 4.70 ERA and .272 opponents’ batting average. Matt Vaughn has eight saves, but has not had an opportunity to add to his total in two weeks due to the team’s losing streak. D.J. Mitchell (3.04) and Stoneburner (3.06) have solid ERAs.

The Tigers will play host to Western Carolina on Tuesday and South Carolina on Wednesday before playing at Duke in a three-game series over the weekend.