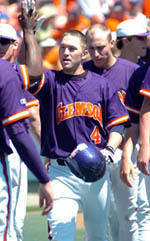 In cold and windy conditions (steady wind blowing in from left) during both days (doubleheader on Saturday) in Chestnut Hill, MA, Clemson outscored Boston College 12-7, committing just two errors in the process.  The Tigers hit .245 to Boston College’s .237.  Taylor Harbin was 5-for-11 (.455) with two RBIs, while Marquez Smith was 4-for-11 (.364) with two doubles and three RBIs.  The Tiger pitching staff had a 2.08 ERA in the series.  Four relievers combined for 11.1 innings pitched in the series, and allowed just six hits, no runs, and two walks with 10 strikeouts.

During the week, Clemson hit .244 to its opponents’ .258 batting average.  Harbin was 9-for-20 (.450) with two doubles, a triple, a homer, and three RBIs, while Travis Storrer had two homers and seven RBIs.  Tiger pitchers combined for a 3.27 ERA.  In two appearances (11.2 innings pitched), David Kopp totaled 14 strikeouts.

The Tigers will enter their first non-five-game week in over a month with a 29-13 overall record and 12-6 ACC mark (6-0 at home and 6-6 on the road).  The early part of the week will also mark the first time since mid-March that Clemson will have back-to-back days without a game.  Through Saturday, the Tigers had played 28 games in the span of 37 days.

The pitching staff’s season ERA stands at 3.56 with a .253 opponents’ batting average.  The team has 13 saves, including seven by Daniel Moskos.  Moskos has also allowed just seven of 27 inherited baserunners to score in 2006, including only two of the last 16.

Clemson will play host to Wofford on Wednesday night before playing host to Virginia Tech in a three-game series at Doug Kingsmore Stadium over the weekend.  The Tigers, who have played just two home ACC series compared to four on the road, will play three of their final four ACC series at home.  Also, 11 of Clemson’s final 14 regular-season games will be at home.