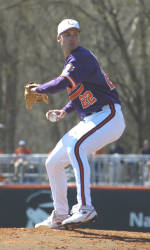 Clemson Baseball to Face Wake Forest on the Road this Weekend

Clemson vs. Wake Forest Clemson (6-2, 0-0 ACC), ranked as high as #17 in the nation, will travel to Winston-Salem, NC to take on Wake Forest (5-4, 0-0 ACC) in a three-game series at Hooks Stadium in both team’s first ACC series of the season. Game times are 2:30 (Friday), 2:30 (Saturday), and 1:00 (Sunday). The Saturday and Sunday games will be shown live via webcast at ClemsonTigers.com for all three games.

The Series Clemson and Wake Forest have met 160 times on the diamond, with the Tigers holding a 114-45-1 lead in the series dating back to the 1901 season.

Last year at Wake Forest, the Tigers won two of three games. Then in the ACC Tourney, the Demon Deacons won 3-2 in another close game. Three of the four games in 2007 were decided by a run.

The Tigers hold a 44-23 lead in games played at Wake Forest. Clemson also holds a 97-33-1 lead in ACC regular-season games.

The Starting Pitchers In game-one, Wake Forest will start senior righthander Ben Hunter (1-1, 2.25 ERA) on the mound. The Cincinnati, OH native and Furman transfer has made two starts for a total of 12.0 innings pitched. He has allowed 10 hits (.217 opponents’ batting average), including nine singles and one double, and six walks with 16 strikeouts.

The Tigers will counter with junior lefthander Ryan Hinson (1-1, 2.45 ERA) on Friday. The Rock Hill, SC native has made two starts for a total of 11.0 innings pitched. He has allowed 11 hits (.262 opponents’ batting average) and three walks with nine strikeouts.

In game-two, the Demon Deacons will send out junior lefthander Garrett Bullock (1-0, 7.20 ERA) on the mound. The Greenville, NC native has made two starts for a total of 10.0 innings pitched. He has yielded 13 hits (.310 opponents’ batting average) and eight walks with three strikeouts.

Clemson will counter with junior righthander D.J. Mitchell (1-1, 3.48 ERA) on Saturday. The Rural Hall, NC native has made two starts for a total of 10.1 innings pitched. He has yielded 13 hits (.302 opponents’ batting average) and six walks with 10 strikeouts.

In game-three, Wake Forest will start senior righty Charlie Mellies (0-2, 6.97 ERA) on the mound. The Clifton, VA native has made two starts for a total of 10.1 innings pitched. He has allowed 15 hits (.326 opponents’ batting average) and no walks with 11 strikeouts.

The Tigers will counter with freshman righthander Graham Stoneburner (1-0, 2.70 ERA) on Sunday. The Richmond, VA native has made two starts for a total of 10.0 innings pitched. He has allowed eight hits (.222 opponents’ batting average) and two walks with seven strikeouts.

The Demon Deacons Wake Forest, led by fourth-year Head Coach Rick Rembielak, enters the series against #17 Clemson with a 5-4 record after beating North Carolina-Greensboro 13-6 on Wednesday. The Demon Deacons also won three of four games in a tournament at Dothan, AL over the weekend. Wake Forest has played just two home games this season and has a 1-1 record in those games.

The Demon Deacons are averaging 8.7 runs per game and hitting .313 with a .406 on-base percentage. The team is one of the national leaders in stolen bases, as it has swiped 27 in 29 attempts.

Ian Tomkins is 8-for-12 (.667) at the plate, while Weldon Woodall is hitting .500 (8-for-16). Evan Ocheltree is batting .367 with a team-high 12 RBIs and Brett Linnenkohl is hitting .364 with a team-best eight steals. All-America candidate and first-baseman Allan Dykstra has two homers and four RBIs along with a .321 batting average. He has a .568 on-base percentage thanks to 13 walks and three hit-by-pitches as well.

The pitching staff has a 6.72 ERA and .300 opponents’ batting average. The pitchers have also combined to strikeout 63 batters against 50 walks. Righthander Phil Negus is one of the top Demon Deacons out of the bullpen, as he has allowed just four hits (all singles) in 9.0 innings pitched over four relief appearances this season. Wake Forest is fielding at a .965 clip as well.

The Tigers Clemson enters the weekend series at Wake Forest with a 6-2 record after defeating Wofford 9-7 on Wednesday. The Tigers, who are 1-1 on the road this season, also bring a #17 national ranking into the series.

The pitching staff has a 3.93 ERA and .279 opponents’ batting average. Righthander Matt Vaughn has struck out 10 against no walks in 6.0 innings pitched and has all three of Clemson’s saves this season. The Tigers are fielding at a .959 clip as well.

Worth Noting  Tiger pitchers struck out 13 batters against 11 walks in the first two games this season. Since, they have combined for 49 strikeouts against only nine walks (5.4 strikeout-to-walk ratio) in the last seven games.

Super Sophomores Righthander Justin Sarratt (Gaffney, SC) and lefthander Matt Zoltak (Philadelphia, PA), the only two sophomores to appear on the mound in 2008, have been a big reason the Tigers are 3-0 in games decided by two runs or less. Each has made four relief appearances, as they have combined to allow just two earned runs in 14.1 innings pitched (1.26 ERA) and walk two batters with 12 strikeouts.

Clemson Rallies to Top Wofford 9-7 Clemson, ranked #17 in the nation, rallied from a 7-2 deficit to defeat Wofford 9-7 at Wilson Boyd two-out, two-run single in the seventh inning gave the Tigers the lead for good. Clemson outhit the Terriers 14-11, as Ben Paulsen and Matt Vaughn pitched a perfect ninth inning to record the save. Five Tiger pitchers combined for 12 strikeouts as well.