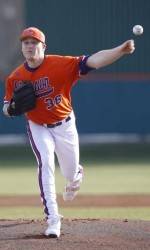 Clemson vs. Wright State Clemson (3-0), ranked as high as #15 in the nation, will host Wright State (2-2) in a three-game series at Doug Kingsmore Stadium this weekend. Game times are 4:00 PM (Friday), 2:00 PM (Saturday), and 1:00 PM (Sunday). All three games will be broadcast live on the radio by WCCP (104.9 FM) out of Clemson and can be heard live on the internet at WCCPFM.com. Live stats will also be available at ClemsonTigers.com for all three games.

The Series Clemson and Wright State have never met on the diamond. The series marks the first three of four games against teams from Dayton, OH, as the Tigers will face Dayton on Wednesday at Doug Kingsmore Stadium. Clemson has also never faced Dayton on the diamond.

The Starting Pitchers In game-one, Wright State will start senior righty Alex Kaminsky (0-0, 3.60 ERA) on the mound. The Fostoria, OH native has made one start for a total of 5.0 innings pitched. He has allowed four hits (.222 opponents’ batting average) and no walks with four strikeouts.

The Tigers will counter with junior lefty Casey Harman (1-0, 0.00 ERA) on Friday. The South Burlington, VT native has made one start for a total of 5.0 innings pitched. He has allowed one hit (.063 opponents’ batting average) and one walk with three strikeouts.

In game-two, the Raiders will send out junior righty Michael Meintel (1-0, 0.00 ERA) on the mound. The Shadyside, OH native has made one start for a total of 8.0 innings pitched. He has yielded three hits (.120 opponents’ batting average) and one walk with two strikeouts.

Clemson will counter with sophomore righty Scott Weismann (1-0, 3.86 ERA) on Saturday. The Boxborough, MA native has made one start for a total of 4.2 innings pitched. He has given up six hits (.333 opponents’ batting average) and one walk with six strikeouts.

In game-three, Wright State will start junior righty Max Friedman (0-0, 1.29 ERA) on the mound. The Chicago, IL native has made one start for a total of 7.0 innings pitched. He has allowed eight hits (.333 opponents’ batting average) and one walk with four strikeouts.

The Tigers’ starter for game-three on Sunday has yet to be determined.

The Raiders Wright State, led by sixth-year Head Coach Rob Cooper, enters the series at #15 Clemson with a 2-2 record after splitting four games in a tournament at Cary, NC last weekend. Cooper was an assistant coach for the USA National Team last summer, a team that Tiger shortstop Brad Miller played on. The Raiders went 1-1 against both Canisius and LeMoyne.

Wright State, who played in the 2009 Fort Worth (TX) Regional, is averaging 6.5 runs per game and hitting .280 with a .400 slugging percentage and .403 on-base percentage thanks to 25 walks. The team has also hit nine doubles and three triples along with three steals.

The pitching staff has a 3.00 ERA and .246 opponents’ batting average along with 26 strikeouts against 12 walks in 36.0 innings pitched. That equates to a 2.2-to-1 strikeout-to-walk ratio and 6.5 strikeouts-per-nine-innings-pitched mark. The team is fielding at a .981 clip as well.

The Tigers Clemson, ranked as high as #15 in the nation, enters the series against Wright State with a 3-0 record after winning three games against three different opponents last weekend by a combined score of 29-7. The Tigers are 2-0 at home.

The Tigers are hitting .324 with a .559 slugging percentage and .418 on-base percentage thanks to more walks (13) than strikeouts (8). The team has also totaled six stolen bases.

Will Lamb was 4-for-4 in his one game in the field, while freshman Mike Freeman and Kyle Parker are both 5-for-12 (.417) with one homer and five RBIs.

The pitching staff has a 2.00 ERA and .179 opponents’ batting average. The staff has allowed just four walks against 20 strikeouts, good for a 5.0-to-1 strikeout-to-walk ratio. Freshman righty Jonathan Meyer has pitched 3.0 perfect innings in his two relief appearances and has the team’s lone save. The team is fielding at a .975 clip as well.

Opponent lefthanded batters have combined to go just 3-for-35(.086) this season.

Polls The Tigers moved up one spot to #15 in the Collegiate Baseball poll this week after going 3-0 in three games last week. The Tigers also stayed at #15 in the Baseball America poll. Sports Weekly will not release its first regular-season poll until Monday, as Clemson was #15 in its preseason poll.

Clemson has had at least one final top-25 ranking in 13 of Head Coach Jack Leggett’s first 16 seasons in Tigertown. The Tigers have also been ranked #1 for 20 weeks by at least one of the three major polls under Leggett. Their last #1 ranking came on February 12, 2007 by both Baseball America and Collegiate Baseball.

Lamb Showing His Versatility Sophomore lefthander and utility player Will Lamb (Seaford, VA) entered the 2010 season rated as the #92 player in the nation by TheCollegeBaseballBlog.com. The 6’5″ Tiger showed why he is worthy of that high praise in Clemson’s season-opener against Miami (OH) on February 19.

In one relief appearance this season, he has pitched 2.1 innings. He has a 0.00 ERA and has allowed one hit (.125 opponents’ batting average) and no walks with two strikeouts.

Tigers Go 3-0 on Opening Weekend Clemson, ranked as high as #15 in the nation, went 3-0 against three different opponents from February 19-21. The Tigers outscored Miami (OH), Michigan State, and Furman by a combined score of 29-7 and hit .324. Clemson also totaled nine doubles, five homers, and six stolen bases. Mike Freeman and Kyle Parker both totaled five hits, one homer, and five RBIs. Freshman Jonathan Meyer retired all nine batters he faced over two relief appearances, a big reason Clemson had a 2.00 ERA, .179 opponents’ batting average, and 20 strikeouts against only four walks in the three games.

In the first game against Miami (OH) at Doug Kingsmore Stadium on February 19, Casey Harman, the first of four Tiger pitchers, earned the win by pitching 5.0 innings of one-hit ball. The four Tiger hurlers combined to limit the RedHawks to only two hits and faced just three batters over the minimum.

In the second game against Michigan State at Fluor Field in Greenville, SC on February 20, Scott Weismann earned the win in 4.2 innings pitched, while Lamb, Meyer, and Scott Firth combined to pitch 4.1 scoreless innings in relief to close out the game.

In the third game against Furman at Doug Kingsmore Stadium on February 21, Clemson took a 7-2 lead after four innings and held on for an 8-5 win. Freeman went 2-for-3 with two doubles, three runs, one RBI, two walks, and two stolen bases to lead Clemson’s 10-hit attack. Jason Stolz went 2-for-4 with a double and two RBIs, while Schaus added two hits and two RBIs. Kevin Brady earned his first career win in a starting role, while Meyer pitched 2.0 perfect innings to record his first career save. The Tigers were aided by six Paladin errors.