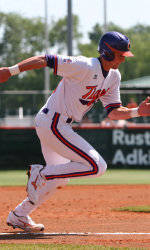 Clemson vs. Dayton Clemson (6-0), ranked as high as #9 in the nation, will host Dayton (4-3) on Wednesday afternoon at Doug Kingsmore Stadium. First pitch is scheduled for 4:00 PM. The game will be broadcast live on the radio by WCCP (104.9 FM) out of Clemson and can be heard live on the internet at ClemsonTigers.com.

The Series Clemson and Dayton have never met on the diamond. The game marks the last of four straight games against teams from Dayton, OH, as the Tigers faced Wright State this past weekend at Doug Kingsmore Stadium.

The Starting Pitchers Dayton will start sophomore lefthander Cameron Hobson (0-1, 5.00 ERA) on the mound. The Crawfordsville, IN native has made two starts for a total of 9.0 innings pitched. He has allowed 13 hits (.333 opponents’ batting average) and three walks with five strikeouts.

The Tigers will counter with senior righthander Justin Sarratt (0-0, 14.73 ERA) on Wednesday. The Gaffney, SC native has made three relief appearances for a total of 3.2 innings pitched. He has allowed six hits (.353 opponents’ batting average) and two walks with four strikeouts.

The Flyers Dayton, led by 11th-year Head Coach Tony Vittorio, enters the game at #9 Clemson with a 4-3 record after going 3-1 in four games in the Upstate last weekend. The Flyers have a 3-2 record on opponents’ home fields and a 1-1 neutral-site mark.

Dayton is averaging 10.3 runs per game and hitting .326 with a .541 slugging percentage and .412 on-base percentage thanks to 33 walks. The team has also hit 28 doubles, one triple, and 10 homers along with nine stolen bases.

Cole Tyrell is hitting a team-best .455 with seven doubles, one homer, and 11 RBIs. Brian Blasik is batting .387, while Jimmy Roesinger is hitting .378. Aaron Dunsmore has added three homers and 11 RBIs, and Zach Jacob has four long balls and 11 RBIs.

The pitching staff has a 6.14 ERA and .333 opponents’ batting average along with 60 strikeouts against 22 walks in 63.0 innings pitched. That equates to a 2.7-to-1 strikeout-to-walk ratio and 8.6 strikeouts-per-nine-innings-pitched mark. The team is fielding at a .947 clip as well.

The Tigers Clemson, ranked as high as #9 in the nation, enters the game against Dayton with a 6-0 record after sweeping Wright State at home in a three-game series by a combined score of 24-15. The Tigers are off to their best start since 2002, when they started 13-0. Clemson is 5-0 at home in 2010.

Kyle Parker is hitting .435 with three homers and seven RBIs, while Jeff Schaus is batting .429 with a homer and 11 RBIs. Brad Miller is the only Tiger to hit safely in all six games of 2010 and is batting .381 with five doubles.

The pitching staff has a 2.50 ERA and .223 opponents’ batting average. The staff has allowed 12 walks against 40 strikeouts, good for a 3.3-to-1 strikeout-to-walk ratio. Alex Frederick and Jonathan Meyer have one save apiece. The team is fielding at a .960 clip as well.

Schaus Providing Punch From #3 Hole Junior outfielder Jeff Schaus (Naples, FL) was Clemson’s lone All-ACC player in 2009. He has continued his First-Team All-ACC numbers in 2010, as he is hitting .429 with one homer, two doubles, 11 RBIs, four runs, and a stolen base in six games. He is Clemson’s everyday hitter in the #3 spot in the lineup and leads the team in RBIs.

Against Wright State on February 28, he had one of his best career games, as he was 3-for-3 with a homer, five RBIs, and two runs in Clemson’s 12-6 victory.

Clemson Sweeps Wright State Clemson, ranked as high as #15 in the nation, swept Wright State by a combined score of 24-15 in a three-game series at Doug Kingsmore Stadium from February 26-28. Clemson outhit the Raiders .281 to .262 and totaled eight doubles, three homers, 13 walks, and four stolen bases. Kyle Parker and Brad Miller both went 5-for-11 in the series. The Tiger pitching staff had a 3.00 ERA and struck out 20 against eight walks.

In game-one on February 26, Parker went 3-for-3 with two runs in Clemson’s 4-3 win over Wright State. The Tigers took a 2-0 lead in the second inning and never trailed again despite Wright State scoring single runs in the sixth, seventh, and eighth innings. The Raiders put 16 batters on base, but four Tiger pitchers combined to limit Wright State to just three runs, as it stranded 11 runners on base. Alex Frederick retired the only batter he faced to pick up his first career save. Miller added two hits for the Tigers, who were outhit 9-6.

In game-two on February 27, Miller’s run-scoring double in the eighth inning gave Clemson the lead for good in its 8-6 win over Wright State. The Tigers held a 4-1 lead before the Raiders scored four unearned runs in the fifth inning to take a 6-4 lead. But Phil Pohl’s two-run single in the sixth inning tied the score. Miller’s RBI double and Jason Stolz’s suicide squeeze bunt in the eighth gave the Tigers an 8-6 lead. The bottom three Tigers in the lineup combined to go 4-for-8 with seven RBIs. Pohl went 2-for-4 with four RBIs, while Miller added two doubles and three runs. David Haselden retired all seven batters to close out the game and earn the win.

In game-three on February 28, Schaus went 3-for-3 with a homer and five RBIs and Parker hit two solo homers to power Clemson past Wright State 12-6 and sweep the series. The Tigers scored 11 runs in the first five innings and never looked back. Mike Freeman went 3-for-5 with three runs and an RBI, while Miller went 2-for-5 with a double and two runs. Starter Will Lamb, the first of seven Tiger pitchers, picked up his first career win by tossing 4.0 effective innings. The Raiders outhit Clemson 13-12, but they stranded 11 runners on base. The Tigers also turned three double plays.