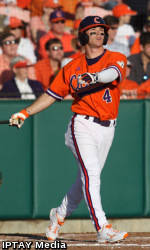 Clemson vs. Charleston Southern Clemson (20-17) will host Charleston Southern (14-24) at Doug Kingsmore Stadium on Tuesday. First pitch is scheduled for 6:30 PM. The game will be available live via webcast on TigerCast at ClemsonTigers.com. The game will also be broadcast live on the radio by WCCP (104.9 FM) out of Clemson and can be heard live on the internet at ClemsonTigers.com as well.

The Series Clemson and Charleston Southern have met 15 times on the diamond, with the Tigers holding a 15-0 lead in the series dating to 1976. In the last meeting in 2011, the Tigers topped the Buccaneers 19-1 at Doug Kingsmore Stadium thanks in part to four runs by Richie Shaffer.

The Starting Pitchers Charleston Southern will start junior righthander Kevin Buran (0-4, 5.77 ERA) on the mound. The Richmond, VA native has made six starts and four relief appearances for a total of 34.1 innings pitched. He has yielded 53 hits (.371 opponents’ batting average), no home runs, and 11 walks with 20 strikeouts.

Clemson will counter with freshman righty Daniel Gossett (3-2, 5.67 ERA) on Tuesday. The Lyman, SC native has made six relief appearances and five starts for a total of 33.1 innings pitched. He has surrendered 31 hits (.244 opponents’ batting average) and 15 walks with 41 strikeouts.

The Buccaneers Charleston Southern, led by fourth-year Head Coach Stuart Lake, enters Tuesday’s game at Clemson with a 14-24 overall record and 6-6 Big South Conference mark after winning two of three games at home against Gardner-Webb over the weekend. The Buccaneers, who are 3-5 in one-run games, are 3-9 on opponents’ home fields in 2012.

Also on the Buccaneer staff is Assistant Coach Adam Ward, a 2009 Clemson graduate who lettered three times (2007-09) as a catcher at Clemson.

Charleston Southern is averaging 4.4 runs per game and hitting .283 with a .365 slugging percentage and .349 on-base percentage thanks to 109 walks and 30 hit-by-pitches against 217 strikeouts. The team has totaled 53 doubles, five triples, 14 home runs, and 30 stolen bases in 41 attempts.

Chase Shelton leads the team with a .344 batting average along with eight doubles, three homers, and 19 RBIs. Bobby Ison is hitting .318 with four steals, while Alex Tomasovich is batting .305 with one homer and 16 RBIs. Jaren Sustar is hitting .300 with a team-high six stolen bases as well.

The pitching staff has a 4.86 ERA and .288 opponents’ batting average along with 236 strikeouts against 121 walks in 331.2 innings pitched. Senior righty Corey Deighan has three of the team’s four saves along with a 3.66 ERA in 32.0 innings pitched over 19 relief appearances. Charleston Southern, who has allowed 74 stolen bases in 97 attempts, is fielding at a .959 clip as well.

The Tigers Clemson enters Tuesday’s game against Charleston Southern with a 20-17 overall record and 9-9 ACC mark after falling twice in three games at home against #17 N.C. State over the weekend. The Tigers, who are 14-11 at home, are 4-0 on Tuesday this season.

Richie Shaffer is hitting a team-best .386 with 14 doubles, one triple, seven homers, 35 RBIs, 31 runs, 39 walks, an ACC-best .520 on-base percentage, and five steals. He has also totaled multiple hits in nine of the last 10 games. Thomas Brittle is hitting .345 and is riding a 10-game hitting streak. Steve Wilkerson is batting .331 as well.

Worth Noting  In Clemson’s last nine ACC games, neither Clemson nor its opponent has hit a home run.

ACC Standings The Tigers are in third place in the ACC Atlantic Division standings with a 9-9 league record. In the division, Florida State is in first place with a 16-2 record, while N.C. State is second at 11-7. The Seminoles also hold the overall ACC lead at 16-2. In the overall ACC standings, Clemson is tied for fifth place with Virginia. Georgia Tech, Maryland, Virginia Tech, and Wake Forest are in a four-way tie for seventh place at 7-11 as well. The top-eight teams in the overall ACC standings will play in the 2012 ACC Tournament.

Clemson is the only team in the ACC or SEC who has not lost a game by more than five runs. Furthermore, the Tigers have played the nation’s #7-toughest schedule according to the unofficial RPI at WarrenNolan.com.