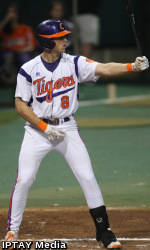 Clemson vs. Furman & Georgia Clemson (18-14) will travel to Fluor Field in Greenville, SC to take on Furman (17-16) on Tuesday at 7:00 PM. Clemson will be the designated visiting team and occupy the third-base dugout. Then on Wednesday, the Tigers will host Georgia (19-13) at Doug Kingsmore Stadium at 7:00 PM. Wednesday’s game will be televised live by CSS.

Tuesday’s game against Furman will be broadcast live on the radio by WCCP (104.9 FM) out of Clemson and can be heard live on the internet at ClemsonTigers.com for both games as well.

The Series (Furman) Clemson and Furman have met 199 times on the diamond, with the Tigers leading 138-57-4 in the series dating back to the 1896 season. Clemson’s first two games in school history were against the Paladins, both losses in 1896, which were the Tigers’ only games that season. The two teams have played at least one game every year since 1983.

In 2011, the Tigers won both games. On April 26 at Doug Kingsmore Stadium, the Tigers blanked the Paladins 5-0 behind Brad Miller’s three-run homer and four RBIs. Then on May 10, Clemson topped the Paladins 5-1 at Fluor Field. The Tigers have won five games in a row in the series dating to 2009.

The Series (Georgia) Clemson and Georgia have met 221 times on the diamond, with Georgia holding a 117-102-2 lead in the series dating back to 1900. The two teams have played at least one game every year since 1959. Georgia is Clemson’s second-most-played rival in history, trailing only South Carolina (298). The Tigers have won five games in a row in the series dating to Georgia’s 4-2 win at Clemson on April 1, 2009.

The Starting Pitchers (Furman) Furman will start sophomore righthander Jacques de Gruy (1-0, 6.92 ERA) on the mound. The Dallas, TX native, who will be making his first career start, has made 13 relief appearances for a total of 13.0 innings pitched. He has allowed 14 hits (.269 opponents’ batting average), all singles, and 10 walks with nine strikeouts.

The Tigers will counter with junior righthander Jonathan Meyer (1-2, 4.61 ERA) on Tuesday. The San Diego, CA native has made 10 relief appearances and three starts for a total of 27.1 innings pitched. He has given up 36 hits (.308 opponents’ batting average) and six walks with 23 strikeouts.

The Starting Pitchers (Georgia) Georgia will start freshman righthander David Sosebee (2-0, 2.66 ERA) on the mound. The Cleveland, GA native has made five starts and one relief appearance for a total of 12.2 innings pitched. He has allowed 14 hits (.292 opponents’ batting average) and three walks with one strikeout.

Clemson will counter with freshman righty Daniel Gossett (3-2, 4.66 ERA) on Wednesday. The Lyman, SC native has made six relief appearances and four starts for a total of 29.0 innings pitched. He has surrendered 26 hits (.236 opponents’ batting average) and 10 walks with 37 strikeouts.

The Paladins Furman, led by 19th-year Head Coach Ron Smith, enters Tuesday’s game against Clemson with a 17-16 overall record and a 7-8 SoCon mark after defeating Elon twice in three games at home over the weekend. The Paladins, who are 4-3 in one-run games, are 11-11 in games played in the city of Greenville this season.

Will Owens leads the team with a .346 batting average along with one homer and 21 RBIs. Will Miller is hitting .309 with eight homers, eight doubles, 31 RBIs, and 11 steals, while Chris Ohmstede is batting .300 with four homers and 15 RBIs. Will Muzika has added a team-high 13 steals in 13 attempts as well.

The Bulldogs Georgia, led by 11th-year Head Coach David Perno, enters Wednesday’s game at Clemson with a 19-13 overall record and a 5-7 SEC mark after falling twice in three games at Arkansas over the weekend. The Bulldogs, who are 6-3 in one-run games, are 2-4 on opponents’ home fields in 2012.

Curt Powell leads the team with a .330 batting average along with a .437 on-base percentage. Hunter Cole is hitting .328 with six homers, eight doubles, and 16 RBIs, while Kyle Farmer is hitting .300 with 13 doubles, three home runs, and 19 RBIs.

The Tigers Clemson enters Tuesday’s game against Furman with an 18-14 overall record and 8-7 ACC mark after sweeping Duke on the road over the weekend. The Tigers, who are 12-2 when scoring at least six runs, are 1-1 in neutral-site games in 2012.

The Tigers are averaging 5.5 runs per game and hitting .275 with a .385 slugging percentage and .365 on-base percentage thanks to 137 walks and 28 hit-by-pitches against 197 strikeouts. Clemson has also totaled 47 doubles, seven triples, 20 homers, and 30 stolen bases in 40 attempts.

Richie Shaffer, who has been named ACC Player-of-the-Week the past two weeks, is hitting .365 with seven homers, 12 doubles, one triple, 31 RBIs, 31 walks, and five steals. Steve Wilkerson is batting .357, while Phil Pohl is batting .306 with five home runs and 31 RBIs. Pohl is riding an 11-game hitting streak as well.

The pitching staff has a 3.43 ERA and .265 opponents’ batting average in 289.0 innings pitched. The staff has allowed 114 walks against 253 strikeouts, good for a 2.22 strikeout-to-walk ratio. Righthanders Patrick Andrews, Matt Campbell, and Daniel Gossett have two saves apiece. The Tigers are fielding at a .967 clip as well.

Tigers 10-3 All-Time at Fluor Field Fluor Field, the home of the Boston Red Sox A affiliate Greenville Drive since 2006, is modeled after Fenway Park, with identical field dimensions and a “Green Monster.” The Tigers have played 13 games at the ballpark since 2007 and are 10-3.

Gossett Named National Player-of-the-Week Freshman righthander Daniel Gossett (Lyman, SC) was named one of four national players-of-the-week by Collegiate Baseball on April 9. In 9.0 innings pitched over two appearances (one start) during the previous week, he allowed just five hits (all singles), no runs, and no walks with 15 strikeouts. Against Winthrop on April 3, he earned the win by tossing 7.0 scoreless innings, allowing just three hits, no runs, and no walks with 13 strikeouts, the most by a Tiger since 2009. Then at Duke on April 8, he pitched 2.0 scoreless innings with two strikeouts to record the save in Clemson’s 4-2 win.