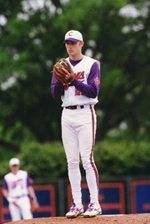 CLEMSON, S.C. – The Clemson at North Carolina baseball game Saturday, which was previously scheduled to start at 7:00, will start at 2:00 PM. The time change is due to the North Carolina basketball team’s game in the Final Four Saturday night. The two teams will play Friday at 7:00 PM and Sunday at 1:30 PM.

Clemson will first play at Georgia Wednesday at 7:00 PM in its next action. Senior righthander Ryan Mottl (5-0, 1.19 ERA) will start on the mound for the Tigers against the Bulldogs. Sophomore righthander Bill Sharpton (2-1, 6.31 ERA) will start for Georgia. Clemson is 23-3 overall and 3-0 in the ACC.

Clemson maintained its #1 ranking in this week’s Collegiate Baseball poll after going 4-0 last week. The Tigers jumped three spots to #4 in the Baseball America poll and moved up one spot to #4 in the USA Today Baseball Weekly poll.

The ACC released the conference statistical leaders on Mar. 27. Ryan Mottl is second at 1.19. Wake Forest’s Scott Siemon is third at 1.59 and Tiger freshman Jarrod Schmidt is fourth at 2.23. Berney is tied for the league lead with Florida State’s Jon McDonald and Siemon with seven wins, but is the only of the three without a loss. Nick Glaser also leads the conference with nine saves, four ahead of Virginia’s Tim LaVigne, who has five. Clemson’s team fielding percentage of .973 is tops in the ACC as well. N.C. State is second at .970.