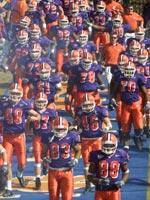 Bill D’Andrea, senior associate athletic director for external operations, announced Monday afternoon the sell out of level one of the WestZone Club seats.

“We’re delighted we’ve accomplished this goal and appreciate the faith of the fans who will occupy the nearly one-thousand seats. Now it’s time to totally focus on getting the football team facilities project underway. The football facilities element of the WestZone Initiative is our highest priority. This is about establishing quality athletic facilities that are long over due for our football program. The seat sales, along with our capital campaign, are the means to this end.”

Construction is set to begin immediately at the conclusion of the 2004 football season. The premium seats and associated high quality guest amenities will be available for the 2006 season. Football team and coaches facilities, including locker rooms, coaches’ offices, strength conditioning facilities, and training rooms will ultimately occupy the West End Zone, along with a One Clemson Museum.

In addition, D’Andrea said that the fall season will see intense focus on capital fundraising for project completion. Clemson will continue to accept waiting list requests for future premium seat additions, but will not accept seat deposits until further notice.

“Clemson is an educational institution whose time has arrived,” said Phil Prince ’49, President Emeritus of Clemson University and Chairman of the WestZone Initiative Campaign. “We are on the threshold of being believers in and supporters of a truly great academic and athletic enterprise. We can help launch Clemson upward from this threshold, or we can — through neglect, disinterest or misplaced energies and efforts — let this window of opportunity be lowered, or closed completely, and miss this chance for greatness.”