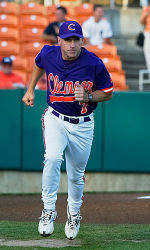 The Tigers will open the season with six home games thanks to back-to-back weekend series against James Madison (February 17-19) and Mercer (February 24-26). The following weekend (March 3,4), Clemson will play single games at College of Charleston and at South Carolina before returning home to play host to the Gamecocks on Sunday, March 5. From March 10-12, Clemson will welcome Big XII foe Kansas to Doug Kingsmore Stadium for a three-game series.

Clemson will open its 30-game ACC schedule at Virginia from March 17-19. The Tigers will also travel to Miami (FL), Georgia Tech, Boston College, and Duke for road ACC series. Clemson’s initial ACC home series will be against N.C. State from March 24-26. The Tigers will also play home ACC series against Maryland, Virginia Tech, Florida State, and Wake Forest. Clemson will play its final seven games of the 2006 regular season at home, which includes the series against the Seminoles and Demon Deacons. Due to the addition of Boston College to the league in 2006, every ACC team will not play one other ACC foe. Clemson will not play North Carolina in 2006.

Along with the two matchups with South Carolina in early March, the two rivals will play on consecutive Wednesdays in April (5,12). Clemson will also play a home-and-home series with College of Charleston, Georgia, and Western Carolina. Additional non-conference home games on the schedule include games against William & Mary, Gardner-Webb, Elon (2), Winthrop, Furman, and Wofford.

The 2006 ACC Tournament will be played at the Baseball Grounds of Jacksonville (FL) (May 23-28) for the second straight year.