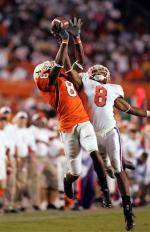 In commenting on how Clemson’s ticket prices compare to some other programs in the southeast, D’Andrea said that the pricing structure was the result of a comprehensive study conducted by IMG Marketing of how athletic programs receive revenue from their ticket customers and supporters. “Most top programs receive only a portion of their revenue from the price of the ticket–the rest of it comes from the annual contributions made by season ticket holders. What we looked at was the whole picture.”

D’Andrea said the study looked at several top programs for both the ticket revenue and the contribution revenue received for each seat. “When you look at some of our study results, Clemson remains relatively low. We made comparisons at the 20-30 yard-line section in several stadiums. The average revenue received from one of those seats in Death Valley is $71.50. At Georgia it’s $170, at Tennessee it’s $114, at USC it’s $126.”

Clemson single-game prices for the Texas A&M game, the Florida State game, and the Miami game will be $48. The Boston College single-game price will be $40, while the Duke and Temple games will be $35 each. Single game ticket prices total $254 for the entire season, which is $29 more than a discounted season ticket available to IPTAY donors. Clemson sold 52,317 season tickets for the 2004 season. These season ticket numbers in conjunction with 12,000 seats reserved for students, and 7,000 seats held for the visiting team, fill up the vast majority of the over 81,000 seats in Clemson Memorial Stadium.

D’Andrea said he hopes fans will look at the total picture, rather than focusing on single game prices. “We sell the season ticket at much less than the sum of the single game prices. We always encourage the purchase of a season book and appreciate our season ticket holders who are also IPTAY contributors. And we’ve got a great schedule. Miami won’t be back here until 2010.”

Season Ticket applications will be mailed in early April.

*Methodology: Schools were selected on geographic location and program strength. All estimates based on research from university websites, ticket offices, and alumni information (2/23/05). Average contributions will vary based on each school’s policies. Average revenue per seat per game is the season ticket cost, plus average contribution divided by number of home games.