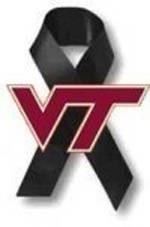 Clemson, SC – The Clemson and Virginia baseball teams will wear Virginia Tech t-shirts during pre-game batting practice in remembrance of the students, faculty and staff who lost their lives on Monday. Prior to Friday’s 7:15 p.m. game at Clemson’s Doug Kingsmore Stadium, there will be a brief ceremony at 7:00 p.m. as the players will line the field during the presentation of colors.

Following the invocation and the playing of our national anthem, the Virginia Tech fight song will be played. An area Virginia Tech alum will throw out the ceremonial first pitch prior to each game.

Fans are encouraged to wear orange and maroon this weekend in support of the students, faculty and staff from Virginia Tech. A Virginia Tech logo will be painted on the field behind home plate, and a Virginia Tech flag will be displayed on the outfield flagpole.

Area Virginia Tech alumni will receive free admission to the three-game series against the University of Virginia this weekend by identifying themselves at the left field ticket window. (Sat., April 21 at 7:00 p.m. and Sun., April 22 at 1:00 p.m.)

Earlier this month it was announced that the Clemson-Virginia Tech football game on October 6 would be Military Appreciation Day. Later this summer, officials from Clemson will meet with Virginia Tech to finalize plans to honor those who lost their lives on Monday and the military personnel from both institutions.