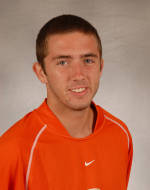 Clemson and Radford Play to a 1-1 Tie

Clemson scored in the 62nd minute on a direct kick. Keegan Priest sent a 23-yard shot from the left side to the upper right corner of the goal to give the Tigers a 1-0 advantage.

Radford scored at the 86:31 mark, 3:29 left in regulation. Josh McCrary stole the ball and drove down the middle. He sent a pass to Iyiola Awosika. Awosika, with his back to his goal, spun to his right and sent an 18-yard skipping shot into the goal to tie the score.

Clemson came close to scoring in the first overtime. The Tigers’ David Newton hit the crossbar with a header in the 92nd minute from a corner kick by Tommy Drake.

“It’s easy to magnify a mistake we made that allowed them to obtain possession and score the tying goal,” said Clemson Head Coach David Newton played hurt today and in Friday’s match. He turned in a solid performance. We will move on and we will get better. This has been a tough stretch for us. Again I can’t fault our effort. We are just making too many mental mistakes, and we need to improve on our focus.”

Clemson will play at Wake Forest in the first Atlantic Coast Conference match of the season on Saturday, September 13, in the Tigers’ next action. Wake Forest is the defending National Champions.