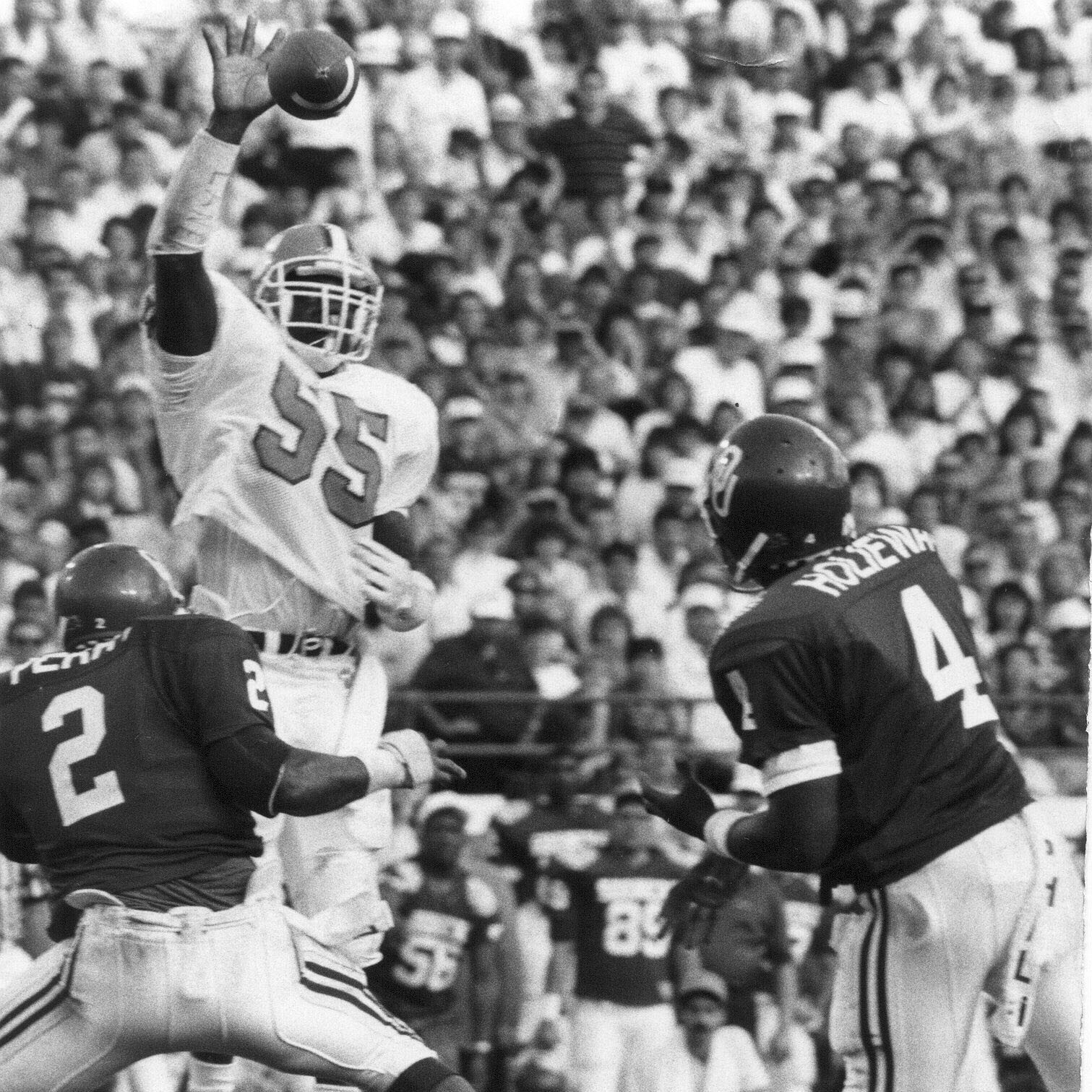 Clemson and Oklahoma in ?89

It will soon be 26 years since Clemson and Oklahoma met on the gridiron. On New Year’s Day, 1989, the two teams met at the Citrus Bowl in Orlando, FL and the game proved to be a classic defensive struggle.

Going into the game both teams were ranked in the top 15, Clemson was ranked 14th and Oklahoma was 10th in the Associated Press poll. Both teams had identical 9-2 records entering the game.

This was the first time the Tigers had faced a wishbone offense since Danny Ford had become the head coach at Clemson. It was ideal conditions for a football game as it was 73 degrees with a breeze of nine miles per hour coming out of the southwest.

Defensive Battle From the Beginning

The first five series in the game resulted in punts by both teams. However, late in the first quarter, Oklahoma drove to the Clemson one-yard line. On first and goal, Clemson linebacker Levon Kirkland stopped Leon Perry for no gain.  On second down, Clemson’s Jesse Hatcher sacked Jamelle Holieway at the 19-yard line. After an incomplete pass the Sooners were forced to try a field goal.

Oklahoma’s R.D. Lashar converted on a 35-yard field goal attempt on the last play in the first quarter. It was a long drive, 11 plays 25 yards, as it took 5:06 off the clock.

Clemson tied the score early midway in the second quarter. Oklahoma’s Holieway’s pass was intercepted by Doug Brewster, setting up Clemson’s first score. The Tigers drove down to the Oklahoma two-yard line but settled for a Chris Gardocki 20-yard field goal to tie the score 3-3.

The drive took 10 plays for 49 yards and it took 5:05 off of the clock. After an Oklahoma punt Clemson again drove deep in Sooner Territory. Gardocki kicked a 46-yard field goal on the last play of the half and gave the Tigers a 6-3 lead at intermission.

Clemson had 127 total yards at the half (30 yards passing) compared to Oklahoma’s 56 yards on the ground, and 0 yards through the air.

Clemson received the kickoff and started at their own 20-yard line. At this point Clemson started one of their infamous long, time-consuming drives. Clemson’s Rodney Williams and Terry Allen went to work.   After 21 yards rushing on the drive and two pass receptions for 17 yards, Allen took a pitch on the left side and ran the ball for four yards and the Tiger touchdown with 10:28 left to go in the game.  This gave Clemson a 13-6 lead. The Tiger scoring drive was 15 plays, 80 yards and it took 6:49.

After Clemson kicked off to the Sooners, Oklahoma drove to Clemson’s 23 yard line. From there, Lashar missed a 39-yard field goal.

The Tigers took over with 6:40 left in the game. The Sooners held the Tigers and Clemson was forced to punt.    The Sooners advanced to Clemson’s 25 yard line after Holieway completed a long pass to Cabbiness. Two plays later Holieway fumbled and Jesse Hatcher recovered the ball at midfield.

After a Clemson three and out, Oklahoma took over at their own 20. With 2:59 left to go in the game, Holieway and company started a 15 play 64 yard drive that took them to the Clemson 14 yard line with 12 seconds remaining in the game. After an incomplete pass, Clemson freshman Dexter Davis knocked down a pass in the end zone to seal the Tiger victory.

Terry Allen was named the game’s MVP, he rushed for only 53 yards but scored the game’s only touchdown and caught four passes for 47 yards to lead all Tiger receivers.

Clemson Head Coach Danny Ford commented on the defensive game. “We had two very fine defensive football team playing and we were able to get a big drive in the fourth quarter. We played hard.  Oklahoma is a very fine football team and an excellent-coached football team.  We said the week prior to the game that we would have an opportunity to gauge the Clemson football program by playing a quality football team like Oklahoma. I would have to say we’re real proud of our senior leadership and this win.”

Clemson linebacker Jessie Hatcher was named the defensive MVP of the game. He finished with five tackles, a fumble recovery, two passes broken up and a caused (forced) fumble.

Hatcher served in the Army National Guard and was a member of the ROTC while at Clemson. Once a month Hatcher had weekend National Guard duty, and sometimes he had to leave right after a game to join his unit.  “Usually, National Guard exercises take place on Saturday and Sunday, so after a game once a month, I would pack up my bags and go join my unit,” said Hatcher. “I would try to catch up on what I missed on the weekend exercise once I got there. While at Clemson he would report to Thomson, Ga. for his weekend duty once a month and was in strenuous exercise again just hours after chasing enemy running backs all day.   Clemson fans were certainly happy to have Jesse Hatcher on the front of their defensive lines on Saturdays back in the late 1980s.

Clemson quarterback Rodney Williams completed only 5 of 11 passes against Oklahoma but he was right on target in a fourth-quarter touchdown drive that gave the Tigers the win.

Williams ran for two first downs on option keepers and completed all 3 passes in the 80-yard, 15-play touchdown march in the fourth quarter. He hit tailback Terry Allen for 11 and 6 yards, and later moved the Tigers to the 5-yard line when he found Gary Cooper on a 10-yard completion.

Two plays later, Allen scored the winning touchdown from the 4 with 10:28 left.

“I think I could have played better,” said Williams, but I am just happy to get the win. With the victory Williams finished his Clemson career with 32 victories-a mark that is still the best among Tiger quarterbacks that was just equaled in 2013 by Tajh Boyd.

The victory also gave Danny Ford a victory over the winningest active coach in Division I, Barry Switzer.   Ford defeated three top coaches in the decade of the 1980s, Switzer of Oklahoma, Tom Osborne of Nebraska and Joe Paterno of Penn State.