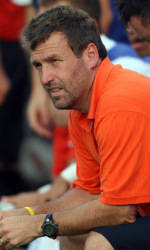 Clemson and Furman will meet Wednesday Night in Greenville, SC

CLEMSON, SCClemson is 0-3-1 on the season following a draw against Atlantic Coast Conference rival Virginia Tech this past Friday.

Furman enters the match at 4-2-0 after splitting a pair of games at this past weekend’s Nike/Aaron Olitsky Memorial Classic in Mt. Pleasant, S.C. After falling to Lehigh 1-0 on Friday, the Paladins defeated Bucknell 2-1 on Sunday.

This will be the 51st meeting between the two schools on the soccer field. Clemson leads the overall series, 38-9-3. The series began in 1934 as the two teams played three matches in February, 1934. Clemson and Furman were the first teams to play an intercollegiate soccer match in the state of South Carolina.