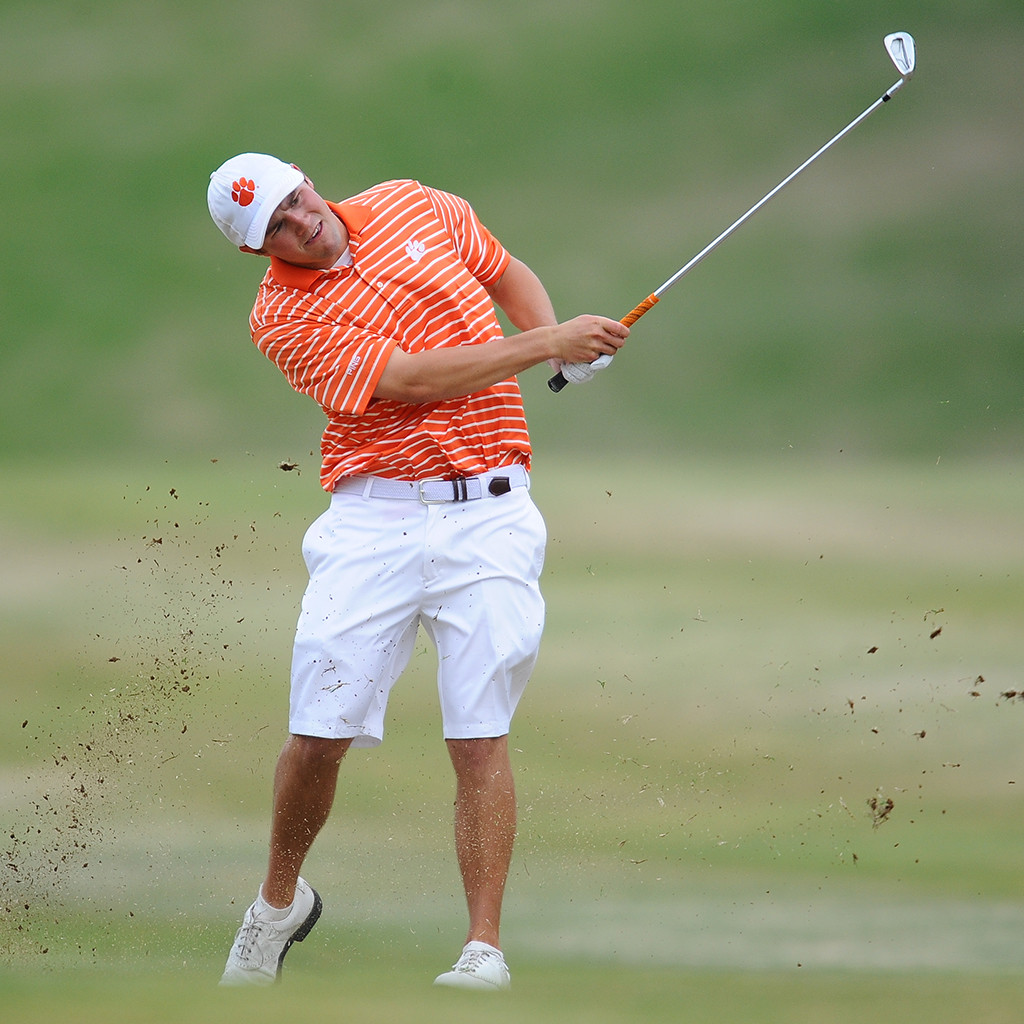 Chapel Hill, N.C.North Carolina native Miller Capps fired a three-under-par 69 on Saturday to lead Clemson to a fifth-place finish at the NCAA Chapel Hill Regional at the Finley Golf Course on the University of North Carolina Campus.  With the top five finish in the 13-team regional, Clemson advances to the NCAA Championship Tournament in Bradenton, Fla on May 29.

Clemson finished Saturday’s round with a team score of 284, four-under par on the par 72 Finley Golf Course that was redesigned in Tom Fazio in 1999.  Clemson finished with a 54-hole  team score of 859, seven shots ahead of sixth-place KennesawState.  Other teams advancing were Charlotte (845), Stanford (850), FloridaState (853) and Florida (855).

It is the first time since 2010 that Clemson has advanced to the NCAA National Tournament.  That team, led by current PGA tour player Ben Martin, finished 16th at the NCAA Tournament in Chattanooga.

“I slept well last night, I really did,” said Clemson Head Coach Larry Penley.  “I liked out team’s attitude last night and I really believed we would play well.

“This was a test of our team’s character and we have been a team of strong character all year.  We showed that at the ACC Tournament when we made up a five-shot deficit over the last two holes to force a playoff.”

Clemson got off to a good start on Saturday, from the very first player in fact, as Miller Capps made a birdie on the first hole played by any Tiger.  “It was important that we get off to a good start,” continued Penley.  “We played the front side first and I was glad to see that because it gave us a chance to make some birdies and put some pressure on the other teams in contention for the cutline.”  North Carolina had to play the back nine first and was four over part early in their round.

All five Clemson players were contributing and the Tigers shot eight-under-par for the front nine.   Clemson’s five players combined to make 12 birdies.  The Tigers went to the back nine with a six shot lead over KennesawState for the last spot and were 12 shots ahead of North Carolina.

Clemson continued to hold a 6-10 shot advantage over KennesawState for the final slot the rest of the round.

A key stretch was the 15th and 16th holes, where Clemson had struggled on Friday.  Clemson played those two holes at six-over-par on Friday, but shot even par on Saturday.  That six shot difference was important.  “We even got a couple of birdies on those holes and that was big.  We kept the lead at the same margin and allowed us to relax over the last couple of holes.

It was the top NCAA Tournament round for Capps, a native of Denver, N.C. who had never broken par in eight previous NCAA Tournament rounds.  “I hit the ball better from tee to green and made a couple of putts today,” said Capps, who leads the Clemson team in birdies this year with 135, six of whom came on Saturday.  “Being from nearby, it was very important for me personally to advance through this regional.”

Capps best birdie came on the 16th hole when he made a 12 footer on the hole that played the most difficult for the week.  “That was an especially big birdie considering how we had struggled on that hole all week,” said Penley.

Stephen Behr and Cody Proveaux also contributed to Clemson’s performance on Saturday.  Both players had even par rounds of 72.  Behr made a chip in from 70 feet on the par three 12th hole for a birdie.  Proveaux played the last six holes at two under par, including a birdie on the 469 yard par four 15th hole.

All five Clemson players shot par or better on Saturday, the first time a Clemson team had done that in a regional since May 17, 2001 at the Green Course in Williamsburg, Va.

“I said yesterday that it is important to have all five players in the game, especially in the final round,” said Penley.  “We had that today, in fact all five players shot par or better. That is a clutch performance in the last day of a regional.”