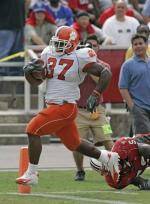 This week, Clemson has qualified as one of four finalists among more than 400 universities nationwide for the “Pontiac Game Changing Performance” competition on ESPN. Clemson’s Reggie Merriweather takes the handoff from Charlie Whitehurst and runs 38 yards for a TD to rally the Tigers to a win. Whitehurst’s handoff to Merriweather is the play nominated for the “Pontiac Game Changing Performance” of the Week.

Now, NCAA fans will select the winner among the four colleges by visiting www.pontiac.com/ncaa, viewing a video of each play, and casting their votes for the play of their choice. Voting occurs from Sunday morning through Wednesday night, with the winning university announced during the Pontiac Performance Halftime Report on ESPN Thursday night.

Each week, the winning university earns a $5,000 contribution from Pontiac for their general scholarship fund. Additionally, the winning play may be nominated for the “Pontiac Game Changing Performance of the Year” competition in December. The play selected in fan voting as the best of the year will earn an additional $100,000 general scholarship fund contribution from Pontiac to the winning NCAA® institution. The key is ­ fans need to get online and vote! By the end of the season, Pontiac, a leading sponsor of the NCAA sporting events and collegiate athletics will have contributed nearly $200,000 to NCAA institutions.

Pontiac is a division of General Motors Corporation (NYSE: GM) and markets the G6 sedan and coupe, GTO, Solstice roadster, Torrent SUV, Grand Prix, Vibe and Montana SV6. In 2006, Pontiac will introduce the G6 retractable hardtop convertible. Pontiac sold more than 474,000 vehicles in 2004, ranking third among GM divisions in total sales. More information on Pontiac and its products can be found on the division’s website at www.pontiac.com and in Spanish at www.pontiac.com/espanol.