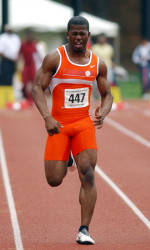 Clemson, SC – The men’s track & field program at Clemson is 14th in the initial Trackwire rankings for the outdoor season. The Tigers have a total of five student-athletes and one relay team listed in the ‘Dandy Dozen’ of various events.

Travis Padgett, national champion in the indoor 60m dash, is listed atop the rankings in the 100m. He was an All-American in that event as a freshman last season, and has posted regional-qualifying times in two outings so far this season. Fellow sprinter Jacoby Ford is listed fifth in the 100m, despite not having seen action this season due to spring football practice. He finished third in the 60m dash at NCAAs in March.

Itay Magidi is ranked among the ‘Dandy Dozen’ in the steeplechase, his best event. Magidi has yet to compete during outdoor season as well, but was ninth in the NCAA indoor 3000m run last month. He is second on the Tigers’ all-time performance list in the steeplechase.

Ryan Koontz is ranked among the ‘Dandy Dozen’ in the decathlon in the eighth spot. He earned All-America honors last outdoor season in the 10-event competition, and was an indoor All-American last month in the heptathlon. He ranks fourth on Clemson’s all-time performance list in the decathlon.