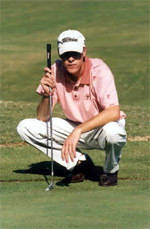 Clemson seniors Brian Duncan and Stephen Poole are both ranked among the top 50 golfers in the nation according to the Sagarin-Golfweek rankings. The rankings are dated April 17, 2006 and include the results of the United States Collegiate, which was played April 10-11 at the Golf Club of Georgia.

Duncan is ranked 20th in the individual ranking nationally and is fifth among ACC golfers. The native of Greenville, SC has been ranked in the top 25 for most of the season. He has two top 10 finishes this year, but has been in the top 20 in seven of his eight events. His seventh place finish at Las Vegas was his best of the year and he also had a ninth place finish at Bulls Bay. Duncan’s 73.25 stroke average is the best among Tigers so far this year. He is trying to become the first Clemson golfer to rank in the top 20 in the Sagarin rankings since Matt Hendrix (10th) and Jack Ferguson (17th) both had top 20 finishes in 2003-04.

Poole has been Clemson’s hottest golfer of late. The senior from Spartanburg jumped from 67th to 46th on the Sagarin rankings with his medallist honors at the United States Collegiate on April 10-11. That field included five of the top 10 teams in the nation so that title jumped his ranking over 20 spots. Poole has two tops 10s and four top 20 finishes this year and has a 73.37 stroke average for his nine tournaments. He is the only Tiger golfer to compete in all nine events so far this season.

Clemson moved into 10th place nationally on the Sagarin/Golfweek computer rankings released on April 17, 2006. The Tigers moved into the top 10 with their victory at the United States Collegiate at the Golf Club of Georgia, April 10-11. This is Clemson’s highest ranking of the 2005-06 academic year.

Clemson is ranked 15th in the latest Golf Coaches Association poll, but the results of the United States Collegiate were not factored into the vote by the Coaches Association. That poll is dated April 12, but ballots had to be submitted prior to the conclusion of that tournament. The next Coaches poll will be released after the ACC Tournament.

Clemson ranked 17th in the preseason Golf Coach’s Association poll and finished the fall ranked 21st. Clemson has been ranked as high as 14th during the spring season. The Clemson program ranked in the final top 10 every year between 1996 and 2003, including the number-one ranking in 2003 when Clemson won its only national championship in golf.

Georgia ranked first in the latest Sagarin computer rankings with a 69.78 rating. Oklahoma State is second at 69.88, followed by third place Florida at 70.30. Georgia Tech, the highest ranked ACC team, is fourth at 70.65 and UCLA is fifth at 70.81. Clemson defeated Georgia, Florida and Georgia Tech at the United States Collegiate and beat UCLA at the Augusta State Invitation in the event prior to that. Clemson is second best among ACC teams on the Sagarin rankings with its #10 rating.