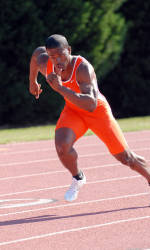 Clark, Padgett Lead Tigers on Day One at Tyson Invitational

Fayetteville, AR – Travis Padgett finished third in the 60m invitational and Matt Clark was seventh in the 5000m run to lead the Clemson men’s track & field team on day one at the Tyson Invitational. The meet is being held at the Randal Tyson Center, home of the NCAA Indoor Championships next month.

Padgett improved on his 60m invitational performance from a year ago, but could not beat LSU’s two-sport star, Trindon Holliday. The diminutive sprinter posted a 6.60 to win the sprint, while Padgett was relegated to third place with a time of 6.68 seconds. C.J. Spiller (6.76) was sixth in the event.

Larry Clark (no relation) and into fifth place on the school’s all-time 5000m performance list.

Cowin Mills posted a season-best in the 400m dash, clocking a time of 47.98 seconds. The senior from Elkins Park, PA owned the 31st fastest time on Friday in a field of 81 competitors. Andrew Porter (48.52) and Travis Swaggard (48.69) also competed in the quarter mile event.

Tyler Morey had a solid performance in the mile for the Tigers. The freshman from Combined Locks, WI posted a time of 4:19.63, improving on his season-best at this point in the mile.

George Fields, who is starting to work his way back into form this season, hit a mark of 23’6″ in the long jump. The junior from Columbia, SC finished sixth after recording the mark on each of his first two attempts.

The men’s team returns to action Saturday to complete day two at the Tyson meet. Mitch Greeley, the nation’s #1 ranked pole vaulter currently, will highlight the Tigers’ action on the second day, as he will compete in the championship section of the pole vault in the afternoon.