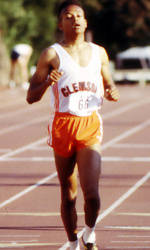 CLEMSON, SC – The city of Hartsville will dedicate Byerly Park’s new track, the Terrance Herrington Track, on Saturday, May 22. The ceremony will take place at 10:00 AM and will be followed by a “Fun Run” with Herrington, a former NCAA Champion, U.S. Olympian and a member of Clemson’s Athletic Hall of Fame.

The general public will have the opportunity to run a mile with Herrington and have t-shirts autographed. All residents and organizations from Hartsville and surrounding communities are encouraged to participate. The event is free and open to the public.

Herrington was a letterman for the Tiger track & field program from 1985-89. He ran anchor leg for Clemson’s NCAA Championship indoor 4×800 meter relay as a senior in 1989. Herrington was a four-time All-American who went on to compete for the United States in the 1500 meters at the 1992 Olympic Games in Barcelona, Spain. Herrington was inducted into the Clemson Athletic Hall of Fame in 2006.