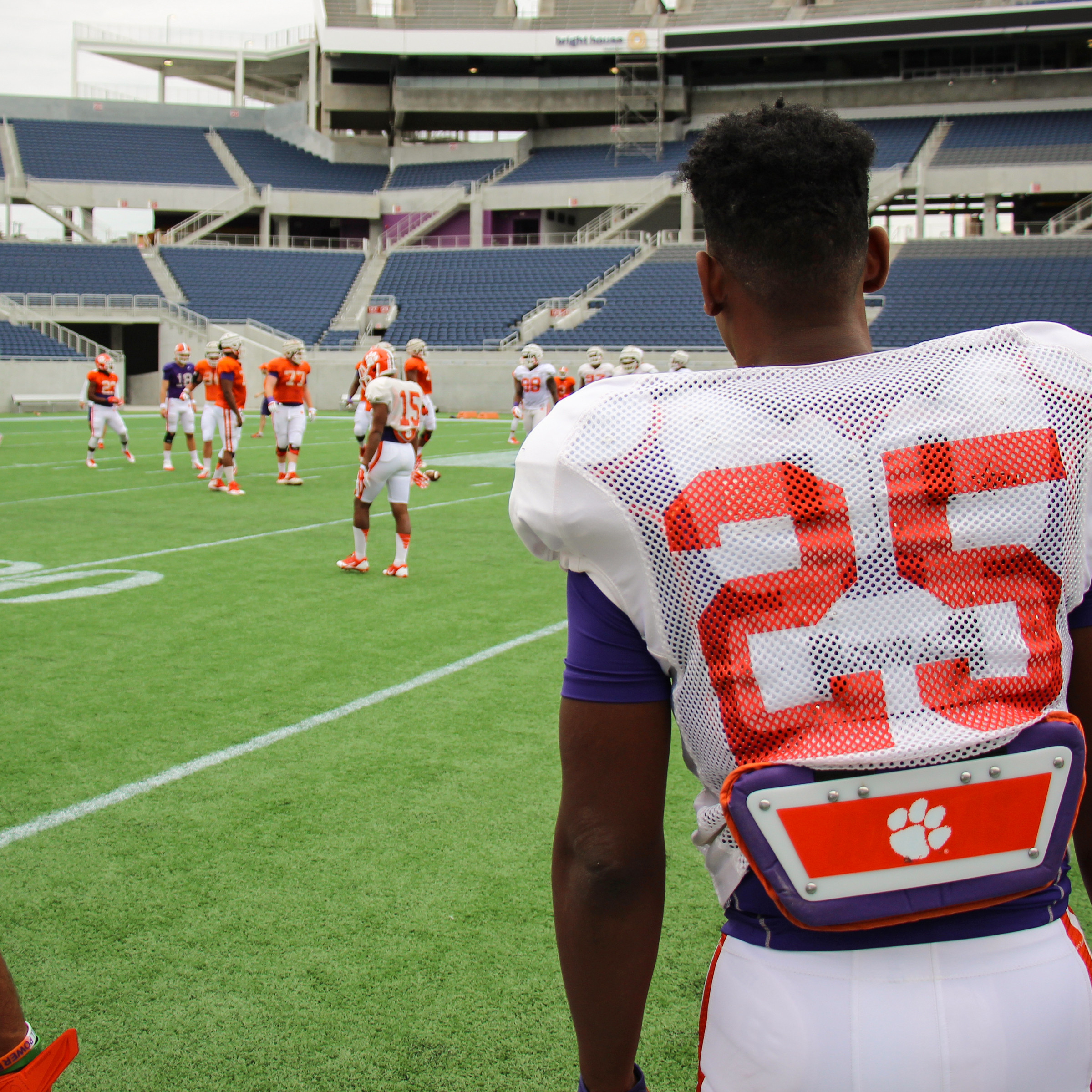 ORLANDO, FLA. – The Tiger football team worked for over two hours in Orlando Citrus Bowl Stadium on Thursday afternoon. Clemson put in a typical full-pads “Tuesday practice” on this Christmas Day. It was the second of four practices for the Tigers, who meet No. 24 Oklahoma in the Russell Athletic Bowl on Monday at 5:30 p.m on ESPN.

The team began the day with a morning Christmas brunch at the team hotel. The event included Christmas carol singing by current players. The Tigers then practiced from 1:15 p.m. to 3:50 p.m. Head Coach Dabo Swinney was pleased with the effort and performance.

“We had a great Tuesday practice, one of the best Tuesday practices we’ve had in a while,” said Swinney, who is leading his seventh bowl game as head coach of the Tigers. “While most people were sitting around eating turkey, our guys were not feeling sorry for themselves. They worked very hard today, and it is a reflection of this team and their work ethic.”

The varsity section of the practice ended with a 50-yard field goal by Ammon Lakip.

The final 20 minutes of practice were devoted to a scrimmage for the younger players, many of whom are redshirting this year. It was the final junior varsity practice of the bowl season.

“I was very pleased with what I saw on both sides of the ball,” added Swinney. “We started with three straight three-and-outs turned in by the defense. Then the offense made a great drive to the one-yard line. On fourth down, the defense stopped the offense. It was a very competitive scrimmage.”

Marcus Edmond had the defensive highlight with a 45-yard interception return for a touchdown. C.J. Fuller led the offense with 37 yards on eight carries and was a big reason the offense drove 74 yards on its last possession.

• The players will have two special stickers on their helmets for the Russell Athletic Bowl. First, the bowl will provide a sticker symbolic of participation in the contest against the Oklahoma Sooners. A second sticker will commemorate the 75-year anniversary of Clemson’s first bowl game, the Tigers’ 6-3 win over Boston College and Head Coach Frank Leahy in the 1940 Cotton Bowl in Dallas, Texas. That was a major victory in school history, as the win was the school’s first over a top-20 team and clinched the program’s first top-20 season. The 1939 team was led by All-American Banks McFadden and finished with a 9-1 record, at the time the most wins in a season in Clemson history.

• Clemson’s Director of Football Equipment, Abe Reed, will be busy in the coming days affixing those stickers, plus the mortarboard stickers for 14 active players who graduated in December. Tiger players wear mortarboard stickers on their helmets once they graduate. Eight current players earned their undergraduate degrees prior to the beginning of the season, so 22 Tigers will wear the stickers in the Russell Athletic Bowl. It will be the most graduates Clemson has had for the kickoff of a game, and Clemson’s 22 graduates are tied for the most in the nation with several other schools.

• Reed is also responsible for keeping track of the Tiger Paw stickers players earn and wear over the course of the season on their helmets. Stephone Anthony has the most on the current team with 153. Tony Steward is second with 136 and Ben Boulware is third with 118. Players receive the stickers for big plays on offense, defense and special teams.

• Among the visitors to practice was current PGA Tour golfer Trevor Immelman. Immelman, who lives in the Orlando area, adopted Clemson as his favorite college team after meeting Swinney during an offseason fishing trip a few years ago. Swinney introduced Immelman to the team prior to practice Thursday, and the 2008 Masters champion said a few words of encouragement to the team. Immelman follows the Tigers each Saturday during the fall, either on television or in person. “Clemson is my adopted college,” said Immelman, who grew up in South Africa and turned professional after high school.

• Swinney had his picture made with Immelman and his family before practice. It was the second time this month Swinney had his picture made with a Masters champion in Orlando. Swinney met Jack Nicklaus at the ESPN College Football Awards Show two weeks ago. Nicklaus’ grandson, Nick O’Leary of Florida State, won the John Mackey Award at that event.

• Eight different Clemson seniors will play in postseason all-star games this year. There could be others, but that is the amount so far. Stephone Anthony, Corey Crawford and Grady Jarrett will play in the Senior Bowl in Mobile, Ala. on January 24. That game will be televised by NFL Network. Tavaris Barnes, Cole Stoudt and DeShawn Williams will participate in the NFLPA Collegiate Bowl in Carson, Calif. on January 17. That contest will be televised by ESPN2. Garry Peters and Daniel Rodriguez will be former Tigers in the Medal of Honor Bowl in Charleston, S.C. on January 10.

• The Russell Athletic Bowl Kickoff Luncheon will be held on Sunday at noon at the Renaissance Orlando at SeaWorld. Tickets are available to the event through Friday. Below is the information.