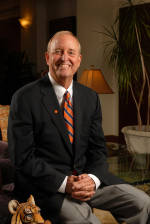 Chapman Gift of $2 Million Aids Academics and Athletics at Clemson

CLEMSON – Atlanta resident Thomas F. (Tom) Chapman, retired chairman and chief executive officer of Equifax Inc., has given Clemson University $2 million to form a leadership program in the College of Business and Behavioral Science and to expand and enhance Doug Kingsmore Stadium.

One million dollars of the gift will support the Thomas F. Chapman Leadership Scholars Program and $1 million will be used to build the Chapman Grandstand, adding 1,000 seats to Clemson’s baseball stadium.

Chapman found his path for success at Clemson, and he credits his involvement in the classroom and on the athletic field for where he is today.

“I know the benefits of the Clemson experience, and I want to enhance that experience for future students,” Chapman said. “I learned valuable lessons on and off the field, and was fortunate to have been blessed from the commitment of mentors who took an interest in my potential.”

As a former student athlete, Chapman received an IPTAY scholarship that funded his Clemson education.

“I believe in paying back what is given to you. My athletic scholarship provided me an outstanding college experience and a future career in professional baseball upon graduation, as well as a quality education,” he said.

Chapman’s gift to the College of Business and Behavioral Science has established a new initiative in something dear to his heart: leadership. The Chapman Leadership Scholars Program is, in part, based on a theme developed by Chapman that uses the analogy of “The Wizard of Oz” scarecrow, lion and tin man characters to communicate the essential traits of leadership.

Chapman graduated from Clemson with an economics degree in 1965. While at Clemson he was a two-time All-Atlantic Coast Conference pitcher on the baseball team. Upon graduation, he was drafted by the Philadelphia Phillies and played professional baseball until April 1968 when he was called to active military service.

“Tom Chapman’s gift is the perfect example of his commitment, and ours, to the ideal of One Clemson,” said Clemson President James F. Barker. “Everything we do here is part of the total `Clemson experience.’ His gift will contribute to molding the next generation of thinkers, leaders and entrepreneurs.”

Claude Lilly, dean of the College of Business and Behavioral Science, said success in an individual’s life is frequently tied to leadership capabilities.

“We do an outstanding job of building our students’ leadership qualities, but we can always do better. In the College of Business and Behavioral Science, we firmly believe that the Chapman Leadership Scholars Program is a uniquely defined initiative that will allow us to strengthen the leadership skills of many of our students, ultimately changing scores of lives in a significant manner,” Lilly said.

“The popularity of Clemson baseball is growing dramatically each year, with a record number of fans coming out to support the Tigers,” said Clemson Athletic Director Terry Don Phillips. “We are grateful for Mr. Chapman recognizing this, as well as the importance of the One Clemson mission for athletics and academics.”

The Chapman Leadership Scholars Program, a three-year experience beginning in a student’s sophomore year, will enhance the leadership potential and skills of select students in the College of Business and Behavioral Science. It will be an integral part of the college’s mission to develop leaders in business and behavioral science. The program includes opportunities to enrich the student’s university experience beyond the classroom and curriculum. A student’s selection will be based primarily on his or her aptitude and willingness to make the extra effort to become an effective leader through research and service. Ten Chapman Leadership Scholars will be named annually, and each will receive a total scholarship of $6,000 over the three years they participate in the program. The first class of scholars is expected to begin the program in fall 2009.

According to Associate Dean Raju Balakrishnan, the students selected as Chapman Leadership Scholars will “reap the true value of the program – the attainment of the intellectual integrity, character and service that Mr. Chapman embodies – as they pursue their own life goals.”

Chapman holds a bachelor’s degree in economics from Clemson. He was drafted by the Philadelphia Phillies and played professional baseball until his Army Reserve unit was activated and deployed to Vietnam, where he served with distinction for more than a year. Chapman also graduated from the Advanced Management Program at Harvard University’s Graduate School of Business in 1978.

Prior to his election as Chairman and CEO of Equifax Inc., Chapman served as Equifax president and chief executive officer. In August 1997, he was elected president and chief operating officer and in January 1998 became CEO. Chapman also was a member of the Equifax Board of Directors from 1994 until his retirement.

For more than 40 years, Chapman built an outstanding career in banking, information technology and marketing. Before joining Equifax in 1990 he spent 20 years with First Atlanta Corp. (acquired by Wachovia Corp. in 1985). At the time of his departure from Wachovia in 1988, Chapman served as executive vice president, where he was responsible for its retail banking division. He then became chief executive officer of Financial Environments Inc., a financial services consulting company that he founded.

Chapman is active in civic and community affairs and is widely recognized as a dynamic writer and lecturer on leadership, strategy and values in business. He currently serves on the board of directors of the Clemson University Foundation and Southern Company and is active in cancer prevention, detection and care initiatives at Piedmont Hospital in Atlanta. Past chairman of the board of Certegy Inc., a former executive committee member of the Metro Atlanta Chamber of Commerce and the Board of Councilors of the Carter Center, he served as a member of the Woodruff Arts Center Board of Trustees and chaired the 2000-2001 Woodruff Arts Center Annual Corporate Campaign. Chapman was the 2004 Corporate Walk Chair for the Georgia Chapter of The Leukemia and Lymphoma Society’s Annual Light The Night Walk.