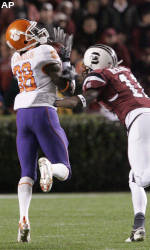 Clemson, SC – Clemson cornerbacks Chris Chancellor and Crezdon Butler are two of the 31 preseason candidates for the Jim Thorpe Award. Three finalists for the award will be named in late Thanksgiving, and the winner will be announced in December on ESPN at the College Football Awards Show in Orlando.

Clemson is one of just four schools nationally with two defensive backs named to the list. Florida, North Carolina and Virginia Tech are the other three schools with that distinction. Clemson is the only school in the nation with both of its starting cornerbacks on the list.

The ACC is obviously strong when it comes to outstanding defensive backs, as three of the four schools with two players apiece are from the ACC. Overall there are eight ACC defensive backs on the list.

Clemson has had one finalist for the award in Tye Hill (2005). The award did not exist the year Terry Kinard was named the National Defensive Player of the Year by CBS Sports (1982).

Chancellor and Butler have combined for 18 interceptions in their careers, 10 for Butler and eight by Chancellor. That is the most by any combination in the ACC. Butler has 10 career interceptions for 196 yards and needs just 80 interception return yards to become Clemson’s all-time leader. Chancellor has eight career thefts for 83 yards. The duo has started together in the Clemson secondary each of the last 26 games.