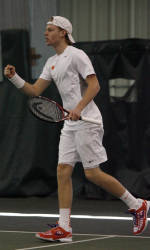 In the Tigers’ first match of the season, freshman Cedric Willems clinched the 4-3 win over College of Charleston after winning 7-6 6-2 at number-six singles.

This was quite the introduction to the world of college tennis for Willems. Willems is the newest member of the Clemson men’s tennis team. He joined the team in early January after deciding in the fall that college tennis would be the best option for him, and eventually chose Clemson.

Willems is from The Hague, Netherlands where he has played tennis since he was five years old. Willems became the under 18 Dutch National Champion in March of 2011, where he beat current college players and highly ranked ITF world players in his run to the title.

The National Champion is a title that has been earned by a variety of great Dutch players including 1996 Wimbledon Champion Richard Krajicek and current ATP #53 Robin Haase. Now the name Cedric Willems is also on the trophy.

As Willems learned in his first collegiate dual match, the world of college tennis is very competitive and he looks forward to the new stage in his tennis career.