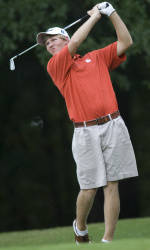 CLEMSON, SC – Clemson golfers Jacob Burger and Crawford Reeves have both been named to the Academic All-ACC Golf Team. Both players were starters on the Clemson team that finished second at the NCAA Southeast Regional and 16th at the NCAA National Tournament. Both golfers had GPAs of at least 3.0 in each semester this past year.

Burger, a sophomore from Orangeburg, SC was third on the Clemson team in stroke average this year with a 72.88 figure. He had a streak of six straight top 20 finishes in the spring, the only Tiger who could make that statement, and was named to the Ping All-District team after he finished 17th at the NCAA Southeast Regional.

Reeves, a freshman from Greenville, SC had a 74.94 stroke average this year, but had a 73.6 average for his last six tournaments. Reeves had a pair of top 10 finishes, but his most important performance took place at the NCAA Southeast Regional when he finished 13th, Clemson’s second best golfer, helping the Clemson team to a second place finish.