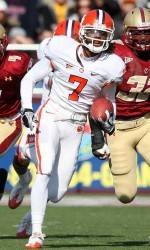 CLEMSON, SC – Clemson wide receiver Bryce McNeal has decided to leave the Clemson football program, but will remain in school as a student. The sophomore had played in the first three games, one as a starter and had one reception for eight yards.

“Bryce has decided to leave the team, but will remain in school with plans to graduate this summer,” said Head Coach Dabo Swinney. “He plans to attend another school and play football in 2012. Graduating in three years will be quite an accomplishment.

“Bryce has been a fine representative of the Clemson program and we hoped he would remain with the team. But, he wants to fully concentrate on his studies so he can graduate this summer. We wish him the best and will help him any way we can.”

McNeal played in 12 of the 13 games last year as a red-shirt freshman and started three games. He had 19 receptions for 187 yards for the course of the season. He had his best game at Boston College last year when he had four receptions for 43 yards. He added 3-33 receiving in Clemson’s 14-13 win over NC State.