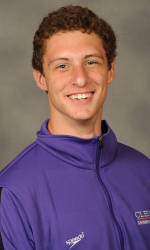 SEATTLE, WA – Clemson junior swimmer Eric Bruckqualified to participate in the 2012 U.S. Olympic Trials with a stellar performance at the Seattle University Invitational on Sunday.

Bruck will compete for a spot on the United States Olympic roster in the 100 freestyle after registering a time of 49.70 seconds in the long-course event. His time in the event is currently ranked as the tenth-fastest in the United States this year. This comes on the heels of his 30th-place finish in the 100 freestyle at the 2012 NCAA Championships.

“It was a great season for Eric,” Clemson Head Coach Christopher Ip said. “He placed the highest in Clemson history with his tie for sixth place in the 50 freestyle at the NCAA meet. The icing on the cake comes with his impressive 50-meter long course Olympic trial performance time of 49.70 seconds in the 100 freestyle that ranks him among the top ten in the United States. He is only getting better. Some University will be very excited to have him for his senior year.”