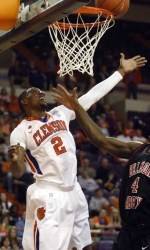 QUICK FACTS  Clemson and Western Carolina will meet on the hardwood for the 11th time in the history of the series Friday evening. The Tigers have won all 10 of the previous meetings, including 79-57 a year ago at Littlejohn Coliseum.  Friday’s game will mark the debut of the Brad Brownell era in Clemson. Brownell compiled a record of 167-85 (.663) in eight combined seasons as the head coach at UNC Wilmington and Wright State.  Brownell is the 21st head coach in Clemson men’s basketball history. The previous 20 head coaches have combined to go 11-9 in their first game as Clemson coach.  Brownell is 1-1 in opening games at different schools. His UNC Wilmington team lost to all-time NCAA wins leader Bob Knight and Texas Tech in his first career game as a head coach. At Wright State, he took the Raiders to a one-point road victory over Miami (OH) in his first game with the school.  Clemson holds an all-time record of 62-37 in season openers. The Tigers have won their last 25 season-opening games, the most famous of which was a thrilling 79-71 upset over defending national champion Kentucky in 1996. Clemson last lost its opening game in 1984 to Tennessee Tech in Cliff Ellis’ first game as head coach.  Clemson is 32-1 in games played during the month of November during the last five seasons. The Tigers’ only loss during that time was last year in Anaheim against Texas A&M.  Clemson defeated Belmont Abbey by a score of 96-57 in its exhibition game on Nov. 5. Six players scored in double figures, led by Noel Johnson with 14 off the bench. The Tigers shot 52 percent from the floor in the exhibition, while limiting the Crusaders to 36 percent overall.  Demontez Stitt is one of three returning starters on the Tiger roster and the only player to average double figures off last year’s team (11.4 ppg). Stitt needs just 98 points to reach 1,000 for his career.  Stitt is second in the ACC among active players with 312 career assists and fifth with 120 steals. He needs just 26 assists to move into the top 10 all-time in school history.  Jerai Grant enters his senior season eighth in Clemson history with 119 blocked shots. He needs eight to pass John “Moose” Campbell for seventh on the all-time list.