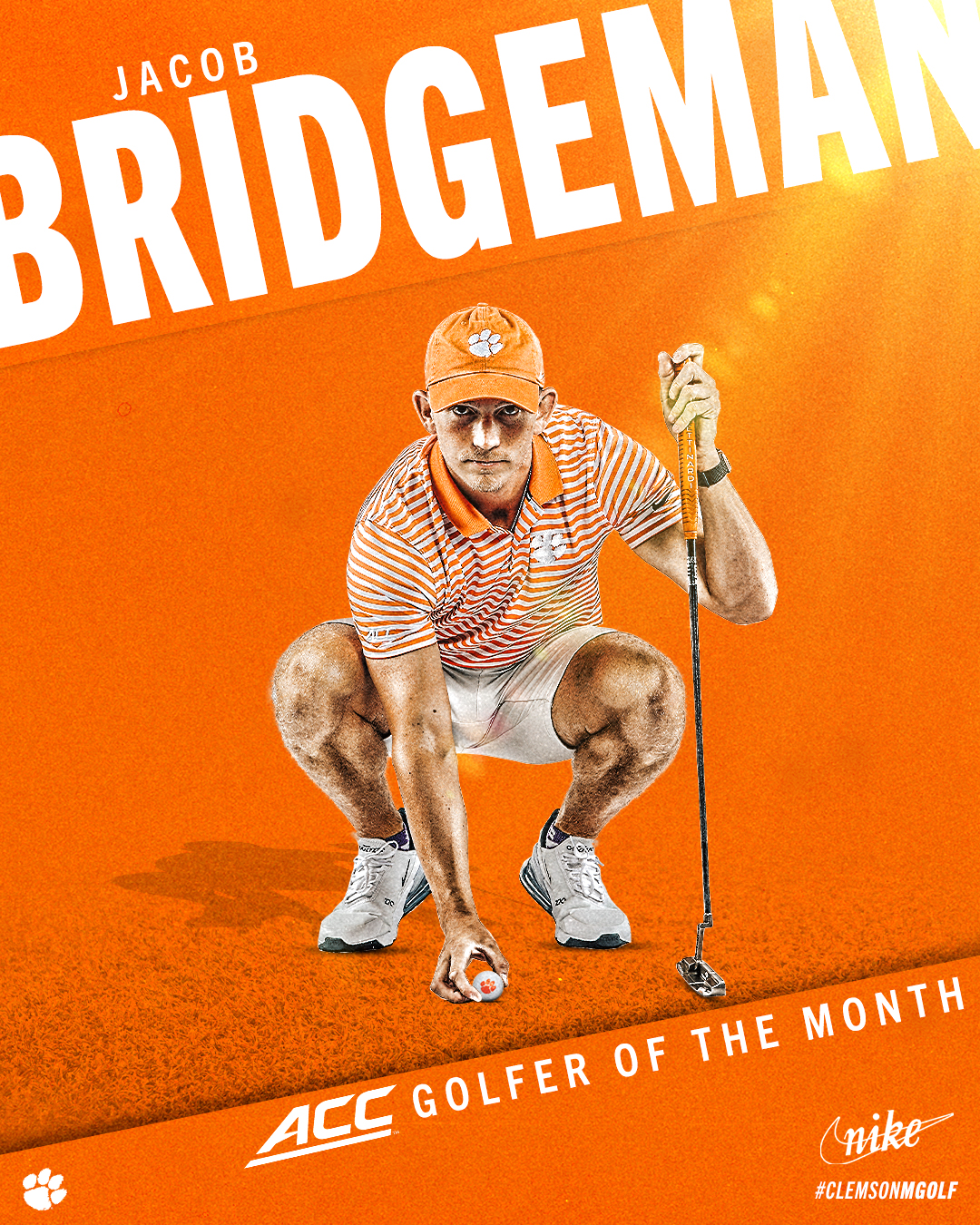 CLEMSON, S.C. — Clemson senior Jacob Bridgeman has been named ACC Golfer of the Month for March. The native of Inman, S.C. was selected for the second time in his career, as he was also chosen in January 2021. He joins former teammates Bryson Nimmer and Turk Pettit as the only two-time selections from Clemson since the award began in 2008.

Bridgeman recently rose to No. 6 in the PGA TOUR University rankings. Bridgeman has moved from 13th to 6th in the ranking and his average has improved 113 points in the last two weeks. He is now just 15 points behind RJ Manke of Washington and the final top-five position.

In six rounds in two tournaments in March, Bridgeman was 27 under par and had a 67.0 stroke average for those rounds.

Bridgeman won his fourth career tournament at the Linger Longer Invitational in Eatonton, Ga. on March 22 with a score of 16-under-par 200. He posted scores of 67-66-67 in gaining the win, just the fourth time in school history a Clemson player had three rounds of 67 or better in the same tournament. His -16 score vs. par tied for the second best score-vs.-par in a 54-hole tournament in Clemson history.

Bridgeman then opened the Valspar on March 28 with rounds of 67 and 63 before finishing with a 72 for a 54-hole score of 202 on March 29. His 63 in the second round included eight birdies and no bogeys, and tied for the third lowest score for 18 holes in Clemson history. It also gave him a record tying five consecutive rounds of 67 or better.

His third-place finish at the Valspar was especially noteworthy in that the field included 20 of the top 100 players in the nation according to Golfstat. His 202 score was nine shots better than Sam Bennett of Texas A&M, the number-two ranked golfer in the PGA University rankings, and 19 shots better than Alex Fitzpatrick of Wake Forest, who is ranked number-nine in the PGA University rankings, one place ahead of Bridgeman.

Not included in his college performance is Bridgeman’s victory at the Canadian Tour Qualifier in Alabama in early March when he shot 19-under-par for the four rounds. That victory gave Bridgeman status on that tour this summer.

Bridgeman has recorded four consecutive top four finishes, the first Clemson golfer to do that since Turk Pettit accomplished the feat in the first four tournaments of the spring of 2018. For the year, Bridgeman has a 70.71 stroke average to lead the team. He has 11 rounds in the 60s and 15 under-par rounds, also best on the team.