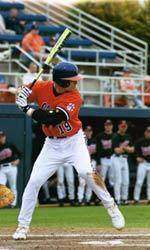 Bradley, Price Awards to be Given to Tiger, Gamecock Players

The voting will be done by media covering the four-game series. The awards will be presented immediately after the fourth game of the series, which will be played in Columbia on Wednesday night.

This is the second year the awards have been given. Jeff Baker won the Bob Bradley Award last year, while Drew Meyer won the Tom Price Award in 2001.

Both Bradley and Price served their respective schools as sports information director for over 30 years. For the past 10 years, Price has served as a consultant for the Gamecock athletics department in the role of SID emeritus and department historian and he provides commentary on some South Carolina baseball games. Bradley passed away this past away on October 30, 2000, after a long bout with cancer.

Bradley served the Clemson athletic department for 45 years, 34 as Sports Information Director and 11 in an emeritas capacity. He was presented the Order of the Palmetto by Governor Jim Hodges two days prior to his death for his service to the state of South Carolina. The native of Randelman, NC was inducted into the Clemson Hall of Fame in 1985 and was presented the Service of Sports Award by the State of South Carolina Hall of Fame.

Bradley was the 1976 recipient of the Arch Ward Award by CoSIDA, which is presented to the Sports Information Man of the Year. He was also inducted into the organization’s Hall of Fame. He was a recipient of the Wilbur Snypp Award for excellence in promotion of college baseball.

Tom Price has spent more than half of his life associated with the University of South Carolina. A native of Augusta, Ga., Price served as USC’s Sports Information Director for 31 years, from 1961 until retiring from his post in 1992. Following his retirement from USC, he received the Service to Sports Award in 1993 from the South Carolina Athletic Hall of Fame.

Price was the recipient of CoSIDA’s Arch Wade Award in 1994 and is also a member of that organization’s Hall of Fame. Price also has received the Wilbur Snypp award for excellence in the promotion of college baseball and was chosen to serve as a baseball statistician for the Games of the XXIII Olympiad in Los Angeles in 1984.