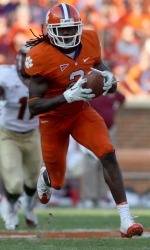 GREENSBORO, NC – Clemson sophomore quarterback Tajh Boyd, freshman wide receiver Sammy Watkins, and Georgia Tech’s Omoregie Uzzi all repeated as award winners and headline a list of eight players named as the ACC Football Players of the Week by the Atlantic Coast Conference on Monday. Boyd, the Offensive Back of the Week, and Watkins, the Receiver of the Week, led the Tigers to their second straight win over a ranked team. Uzzi, the Offensive Lineman of the Week, helped the Jacket offense accumulate 312 rushing yards in the conference opener against North Carolina. Both Clemson and Georgia Tech improved to 4-0 this season with the wins.

Uzzi is joined by teammates Jeremiah Attaochu, the Linebacker of the Week, and safety Isaiah Johnson, the Defensive Back of the Week. Attaochu tallied nine tackles and three sacks, forced a fumble, and tipped a pass that was intercepted by Johnson in the win against the Tar Heels. Johnson had seven tackles in addition to the interception, his second of the season.

Florida State’s Clint Trickett, in his first career start, threw for 336 yards and three touchdowns on the road at Clemson and earned Rookie of the Week honors for his performance. NC State’s T.J. Graham, the Specialist of the Week, compiled 336 yards of all-purpose yardage, the fifth best total in ACC history. James Gayle was named the Defensive Lineman of the Week as the Hokies held Marshall to just six yards rushing.

OFFENSIVE BACK – Tajh Boyd, Clemson, QB, So., 6-1, 225, Hampton, Va. Boyd completed 22-35 passes for 344 yards and three touchdowns to lead the Clemson offense to 35 points and 455 yards of total offense against the nation’s fifth ranked defense. Boyd’s passing yardage total was the fourth highest in Clemson history, the second consecutive week he has had a top four total. He had 31 yards rushing, giving him 375 yards of total offense, the seventh highest total in Clemson history. He had three touchdowns passing and one rushing for four total. It was the second straight week Boyd had quarterbacked Clemson to a win over a top 20 team.

RECEIVER – Sammy Watkins, Clemson, WR, Fr., 6-1, 200, Fort Myers, Fla. Watkins had seven receptions for 141 yards and two touchdowns in Clemson’s 35-28 win over 11th ranked Florida State. He scored on a 62-yard reception and a 24-yard reception, giving him six touchdown receptions in just four games this year. The six TD receptions are a Clemson freshman record and he is the first freshman in Clemson history to score at least one touchdown in four straight games. Watkins now has had at least 140 receiving yards in consecutive games and he joined Rod Gardner as the only Clemson receivers in school history to accomplish that. Watkins was named the National Freshman of the Week by Rivals.com for the second consecutive week. Watkins also had 13 yards rushing and 21 kickoff return yards, giving him 175 all-purpose yards for the game.

DEFENSIVE LINEMAN – James Gayle, Virginia Tech, DE, So., 6-4, 257, Hampton, Va. Gayle had a big game as the Virginia Tech defense smothered the Marshall running game, limiting the Herd to just six yards rushing. Gayle had seven tackles, including 3.0 for loss and 1.5 sacks, to go along with three quarterback hurries to lead the defensive line in the postgame coaches’ grading system.

LINEBACKER – Jeremiah Attaochu, Georgia Tech, LB, So., 6-3, 235, Washington, D.C. Attaochu recorded a career-high nine tackles and three sacks in the win over North Carolina. Attaochu also forced a fumble as well as tipping a pass that was eventually intercepted by teammate Isaiah Johnson. Attaochu ended North Carolina’s last gasp when he sacked UNC quarterback Bryn Renner on the final play of the game.

DEFENSIVE BACK – Isaiah Johnson, Georgia Tech, S, So., 6-2, 205, Tyrone, Ga. Johnson ranked second on the team with seven tackles (four solos) and recorded his second interception of the season on Saturday in Tech’s 35-28 conference opener against North Carolina.

ROOKIE – Clint Trickett, Florida State, QB, Fr., 6-2, 180, Tallahassee, Fla. Trickett made his first career start at No. 21 Clemson and delivered the best performance by a first-time starting quarterback for the Seminoles since Danny Kanell (1993 at Maryland). The redshirt freshman completed 24 of 38 attempts for 336 yards and 3 touchdowns. He was intercepted once. The son of FSU offensive line coach Rick Trickett tossed a pair of second half touchdown passes – 30 yards to Rashad Greene and 9 yards to Kenny Shaw – and threw for 203 yards after intermission as the Seminoles rallied from a 21-10 halftime deficit. He also tossed a 57-yard TD pass to Rodney Smith in the first half. The 336 passing yards were the most by an FSU quarterback this season. Trickett now leads the team with seven TD passes. His performance while filling in for injured starter EJ Manuel was even more impressive when you consider the Seminoles were without three of their top receivers due to injury. Overall, Trickett’s first start numbers were the best by a Seminole quarterback since Kanell passed for 341 yards and 5 touchdowns at Maryland on Nov. 6, 1993 in a 49-20 win while filling in for eventual Heisman Trophy winner Charlie Ward.