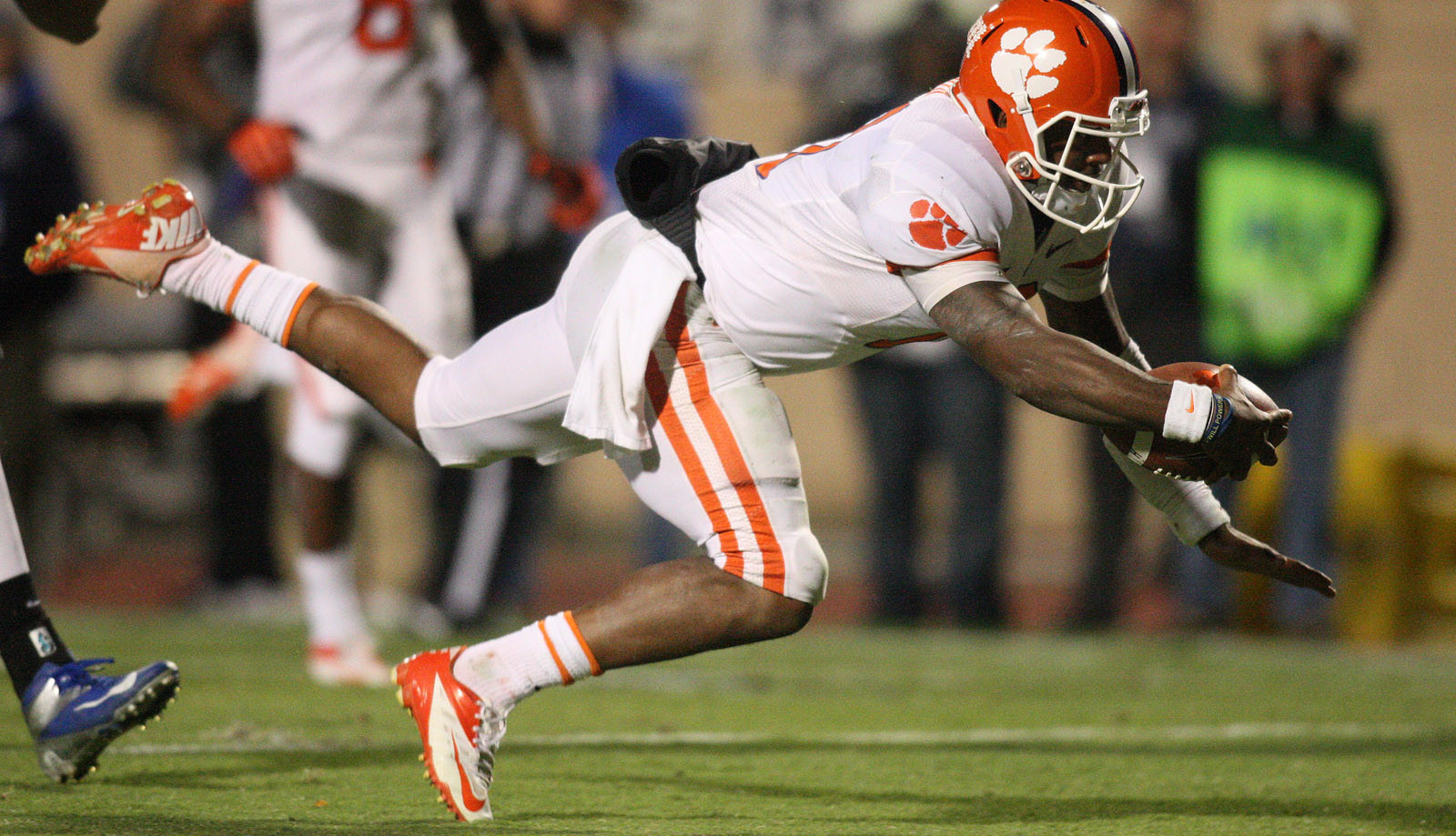 Boyd and Thomas Named ACC Football Players of the Week

GREENSBORO, NC – Clemson quarterback Tajh Boyd and offensive lineman Brandon Thomas headline a list of nine players named as the Atlantic Coast Conference Football Players of the Week, announced by the conference on Monday. Boyd tied the ACC record for touchdown responsibility with six, all in the first half, and Thomas helped the offense accumulate 718 yards for the 10th best offensive performance in conference history in the Tigers’ 56-20 win over Duke.

Wake Forest’s Michael Campanaro, the Receiver of the Week, tied a conference record with 16 receptions and cornerback Kevin Johnson, the Co-Defensive Back of the Week, had seven tackles and an interception in the 28-14 win over Boston College.

Virginia defensive tackle Chris Brathwaite, the Defensive Lineman of the Week, and cornerback Maurice Canady, the Co-Defensive Back of the Week, helped the Cavalier defense limit the Wolfpack offense in the 33-6 win at NC State.

Georgia Tech linebacker Jeremiah Attaochu had three sacks, a forced fumble, and a recovered fumble to be named the Linebacker of the Week after the Yellow Jackets’ 33-13 win at Maryland.

OFFENSIVE BACK – Tajh Boyd, Clemson, R-Junior, QB, 6-1, 225, Hampton, Va.Boyd completed 16-of-23 passes for 344 yards and five touchdowns in the Tigers’ 56-20 win over Duke. He guided the Clemson offense to 718 yards of total offense, the second most in school history and the most by an ACC team this year. Boyd threw all five of his touchdown passes in the first half and also scored on a 21-yard run, giving him six TDR, the most by an ACC player in a game this year. He finished with 416 yards of total offense and a passing efficiency rating of 240, the third best in school history given a minimum of 20 attempts.

OFFENSIVE LINEMAN – Brandon Thomas, Clemson, R-Junior, OL, 6-3, 305, Spartanburg, S.C.Thomas graded 95 percent for his 62 snaps in the win over Duke and had five knockdown blocks in helping the Tigers score 56 points, the most in the program’s history in Wallace Wade Stadium. The 95 percent grade was the highest of his career and the highest for a Clemson starting offensive lineman in a game this year. His blocking was a big reason Clemson rushed for 334 yards and a 6.5yards per carry average on 52 attempts. Clemson finished the game with 718 yards of total offense, second most in Clemson history, 10th most in ACC history and the most by an ACC team this year.

RECEIVER – Michael Campanaro, Wake Forest, R-Junior, WR, 5-11, 195, Clarksville, Md.Campanaro set a school record and tied the ACC mark with 16 receptions in Wake Forest’s 28-14 win over Boston College. He had 123 receiving yards and tied the school record with three touchdown catches. His touchdown receptions were on passes of 5, 27 and 16 yards from Tanner Price. Campanaro broke the previous Wake Forest record of 15 which was shared by three players. The ACC mark of 16 was last accomplished by Alvin Pearman of Virginia in 2003.

LINEBACKER – Jeremiah Attaochu, Georgia Tech, Junior, LB, 6-3, 240, Washington, D.C.Attaochu matched a career-high with three sacks, forced a fumble and recovered a fumble in Georgia Tech’s 33-13 win at Maryland. Attaochu joins Derrick Morgan as the only Tech players over the last five seasons to record three sacks in one game. Attaochu, playing in his hometown, upped his career totals to 22 tackles for loss and 14 sacks.

CO-DEFENSIVE BACK – Maurice Canady, Virginia, Freshman, CB, 6-2, 180, Richmond, Va.Canady started his first game and led Virginia’s defense with seven tackles and had an interception with a return of 39 yards in the Cavaliers’ 33-6 win over NC State. He helped limit the Wolfpack passing game to just 197 yards, a season low. The Wolfpack entered the game averaging 306.9 yards per game. NC State’s longest reception during the game was 14 yards. The last time NC State did not have a reception in a game for at least 15 yards was its season opener in 2006, a streak of 84 games. The Cavaliers also ended NC State’s Bryan Underwood’s streak of catching a touchdown in eight straight games this season, preventing him from tying Virginia’s Herman Moore’s streak of nine straight games with a touchdown catch in 1990.

CO-DEFENSIVE BACK – Kevin Johnson, Wake Forest, R-Sophomore, CB, 6-1, 175, Clarksville, Md.Johnson was second on the team with seven tackles in Saturday’s 28-14 win over Boston College. Johnson had five solo tackles and two assists. He also intercepted a pass for the third time in the last four games and broke up two passes.

SPECIALIST – Gabe Terry, Miami, Freshman, LB, 6-3, 215, Wellington, Fla.Terry blocked a Virginia Tech punt that led to the Miami Hurricanes’ first score of the night during their 30-12 win Thursday over the Hokies. On the Virginia Tech 41, Terry blocked the punt and it was recovered by Rayshawn Jenkins at the Virginia Tech 16 to set up the Miami score two plays later. It was Miami’s first blocked punt since 2008 against UCF and first in ACC play since 2004, also against Virginia Tech.

ROOKIE – Duke Johnson, Miami, Freshman, RB, 5-9, 188, Miami, Fla. Johnson notched his second 100-yard rushing game of the season, collecting 100 yards and one touchdown on 11 carries in Miami’s 30-12 win over Virginia Tech. Sixty-five of his 100 yards came in the first half on one rush, a new career long. Johnson later added a fourth quarter touchdown, his sixth rushing score of the season and first since Sept. 29 vs. NC State. He finished the night with 217 all-purpose yards, his fourth 200 yard all-purpose game of the season. Johnson had 118 returning yards on two returns, including an 81-yard scamper. He now has 13 plays of 25-plus yards, including seven for 50 or more yards.