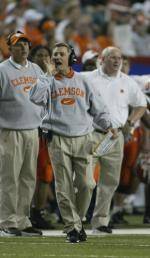 “In any situation, any game you enter, especially after a layoff, you never know what the players’ response will be. The seniors kept the team’s focus and attention, especially over the last week. The fan support has been tremendous; they have really supported us. The players, coaches and support staff have had a great time at the Chick-Fil-A Peach Bowl and look forward to returning as many times as the Bowl Committee invites us.

“This is a good win to have over the sixth-ranked team in the country. Tennessee has had substantial success under Philip Fulmer and this game shows us we are heading in the right direction.

“We executed well today. The coaches prepared us well and the players did what they needed to do. One of the keys to this game was the fact that when Tennessee scored and we answered, and then we scored and it was not answered, that gave us confidence. When the run is there, we must take advantage of that opportunity, and the line did a good job. Stopping Tennessee and having success early were also an important piece of the puzzle tonight. It was important to set the tempo early in the game. There will always be momentum changes, and we needed to establish credibility early.

“Tennessee is a good defensive team, and their defense had a lot of momentum late in the season and leading into this game. Our defense really set the tone tonight. The players concentrated well, the coaches had an excellent plan and we executed well. The offense also executed well and followed the preparation and game plan.

“Chad Jasmin found the holes, and sometimes simply ran over players, and I think that was a little demoralizing for Tennessee. Jasmin also motivated the team – he is a fifth-year guy that came out and played hard. He and LeRoy Hill are always tough. Hill led the team in tackles as a freshman. Even though they played tough tonight, I do not think they have gotten tougher – they have always been that way.

“Before the game, I told Cole Chason (Clemson’s starting punter) not to get us beat. He was going against an All-American punter, certainly one of the best in the nation. Cole Chason did more than not get us beat, he changed the field position which was very important.”