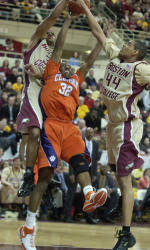 Boston College Just Gets By Clemson, 59-54

BOSTON (AP) -Jared Dudley had 23 points and 11 rebounds, and Sean Marshall scored 18 on Saturday to help Boston College beat Clemson 59-54 and snap a three-game losing streak that knocked the Eagles from first place in the Atlantic Coast Conference.

Dudley, Marshall and Tyrese Rice, who scored 14, accounted for all but four of Boston College’s points. BC (19-9, 10-5 ACC) had lost to Duke, North Carolina and Virginia Tech in an eight-day span to put their NCAA tournament hopes in jeopardy.

K.C. Rivers scored 15 and Trevor Booker had 14 with 10 rebounds for the Tigers (19-9, 5-9). Clemson has lost four in a row, seven of eight and nine of 11 since winning its first 17 games to become the last unbeaten team in Division I. Its only two victories since Jan. 9 were against Florida State and Boston College.

But Dudley tied it with a putback, then converted the three-point play to start and 11-0 run that put BC ahead for good.

Tyrelle Blair blocked six shots for BC, which shot 31 percent from the floor in the first half. Clemson made just 27 percent of its shots in the second.

Clemson had been 17-1 when leading at the half.