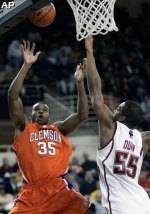 “It seems to drain them,” Tigers center Raymond Sykes said Tuesday night after Oglesby hit six 3-pointers, scoring 18 of his 21 points in the second half to lead No. 12 Clemson to an 87-77 victory over Boston College.

“You can tell by looking at their faces,” he added.

“Especially when you hit two, three in a row, it gives everybody a good feeling,” Oglesby said. “I feel like if I can get my arms up I can put it in the hole. I’ve had all kinds of guys covering me–from 5-10 to 6-8, 6-9. I feel like I can get it off against anybody. I felt like I needed to take advantage of my opportunities in the second half.”

Clemson won for the fourth time in five games, including a 27-point victory over Duke that the Tigers followed by blowing a 19-point lead and losing to unranked Florida State. They’ve reached 20 wins for the third consecutive season — a first in school history.

“Stability,” coach Oliver Purnell said. “When you get a stable program, the wins and losses take care of themselves.”

Rakim Sanders scored 23 with eight rebounds for BC (18-8, 6-5) and Tyrese Rice scored 17 as the Eagles dropped to 1-4 against ranked teams with No. 6 Duke up next on Sunday. BC beat then-No. 1 North Carolina last month, then lost to Harvard in the next game.

“That’s the great thing about this league: Of course I’m disappointed about this loss, but there’s another opportunity coming up,” BC coach Al Skinner said. “It gives us a chance to reboot.”

Sanders was one point off his career-high, but he didn’t score in the last 13:27, spending five minutes of the stretch on the bench.

“We’ve got other players,” Skinner said, denying that Sanders was benched. “If he was, do you think I’d tell you?”

The Tigers trailed 44-37 early in the second half before scoring the next seven points, getting back-to-back steals off the full-court press to take the lead. BC led 57-55 when Booker made a basket and then Oglesby hit a 3-pointer and drew a foul, sinking the free throw to give the Tigers a four-point lead.

After Rice’s layup, Oglesby hit another 3 and Booker rebounded Rice’s miss and got a dunk at the other end to make it a seven-point lead.

“He’s done that before for us,” Purnell said. “He’s an explosive player. We don’t succumb to fool’s gold looking for 3-pointers.”

BC cut it to four points, 75-71, with under six minutes left. But Booker scored on a dunk with 1 second left on the shot clock, then Rice threw it away under pressure and Booker hit a turnaround in the lane to make it an eight-point game.