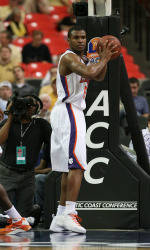 CLEMSON, SC – Trevor Booker collected another preseason accolade Tuesday when he was named a first-team All-American by Basketball Times. The publication’s college basketball preview issue came out this week, and Booker was one of five players named to the All-America squad.

Booker was joined on the Basketball Times All-America team by Cole Aldrich of Kansas, Luke Harangody of Notre Dame, Jerome Randle of California, and Evan Turner of Ohio State. Booker and Turner were teammates together this past summer with USA Basketball at the World University Games.

Multiple publications and Web sites have named the 6-foot-7, 240-pound Booker to their preseason All-America teams. Earlier this fall, he was cited as a third-team All-American by Blue Ribbon and CBSsports.com, and fourth team by FoxSports.com.

Booker is coming off an impressive junior season, when he led the Tigers in scoring (15.3 ppg) and rebounding (9.7 rpg). He led the ACC in rebounds per game and field goal percentage. Booker has been named to the preseason watch list for both the Naismith Trophy and the Wooden Award, presented annually to the nation’s top player.