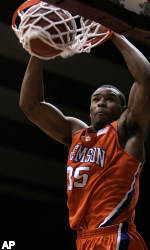 TUSCALOOSA, Ala. (AP) – Rattled, weary and utterly out of synch.

That was the effect of No. 19 Clemson’s pressure defense on Alabama on Tuesday, leading to a runaway 87-61 win in a game that was close into the second half before deteriorating into a mismatch.

Trevor Booker and James Mays scored 18 points each inside and Terrence Oglesby added 17 for the Tigers (12-1), who resumed their domination of the Southeastern Conference.

The result was the worst loss at Coleman Coliseum for the Crimson Tide (10-4) since a 93-60 defeat to LSU in 2000 and the most lopsided home nonconference defeat since losing by 28 to Ohio State in 1970.

Booker was more surprised by the manner of the easy win than the final margin.

Tide coach Mark Gottfried hardly disagreed with that assessment, thanks to what he referred to as a “second-half disaster.”

“I’m completely, 100 percent embarrassed at how my team competed in the second half,” said Gottfried, whose team entered on a six-game winning streak. “That hasn’t been the case for 1 minute of one game this year. I think we got frustrated. Their pressure hurt us. They made a nice run, they made some tough shots, we started getting hurried on offense. We took some bad shots.”

The Tigers have won seven of their past eight games against SEC teams, the only loss coming to No. 18 Mississippi on Dec. 22.

They took control of this one midway through the second half, setting up uncontested shots and denying any such chances for the Tide.

Leading by only five points at halftime, Clemson built the lead to 20 with a 17-4 run that included two easy baskets off stolen inbounds passes. Alabama cut it to 15 points but couldn’t come any closer.

“I thought we wore them down,” Clemson coach Oliver Purnell said. “Our pressure was a big part of the reason we blew the game open. I don’t think it happened right there in the second half. I think it was a cumulative effect.”

The Tigers led by as many as 31 points.

Oglesby hit five 3-pointers for Clemson, which also got 15 points from K.C. Rivers. Booker was 9-for-13 shooting and Mays was 8-for-13, and they had eight rebounds apiece. The combination also helped contain Alabama star Richard Hendrix.

Hendrix had 14 points and seven rebounds, well below his season averages.

“There was a conscious effort not only to limit his touches but also to go at him offensively,” Purnell said. “We were going to keep him playing on both ends so that he couldn’t just rest and play us on offense.”

Alonzo Gee led Alabama with 17 points while Rico Pickett had 12 points and six assists. Mykal Riley was limited to two points, 12 below his season average, and missed all eight of his 3-point attempts.

The Tigers shot 58 percent in the second half and 54 percent overall. They were equally effective on defense, limiting Alabama to 40 percent shooting and a 2-of-18 performance from 3-point range.

“When they made their run and took a lead there of a sizable margin, we did not respond well at all,” Gottfried said. “Period. End of story.”

The normally media-friendly Gottfried did not make players available for postgame interviews.

“That’s my decision,” he said. “I don’t want anybody talking right now. We’re going to go to practice (Wednesday) and get this corrected.”

It was the first time the teams had met since the championship game of the San Juan Shootout in 1989, and it turned into a mismatch even though Alabama led by five points late in the first half.

The Tide fell to 0-3 against ranked teams.

The Tigers’ pressure started taking a toll at the end of the first half, helping fuel an 18-8 closing run for a 40-35 lead. The spurt came in answer to the Tide’s 16-7 run for a five-point edge.

“In the second half, it was just a matter of who wanted it more,” said Mays, playing his second game since returning from a hip injury. “We decided to pick up the pressure, and that turned into turnovers and easy layups.

“We knew it was going to be a physical game. We had to go at them or they were going to go at us.”