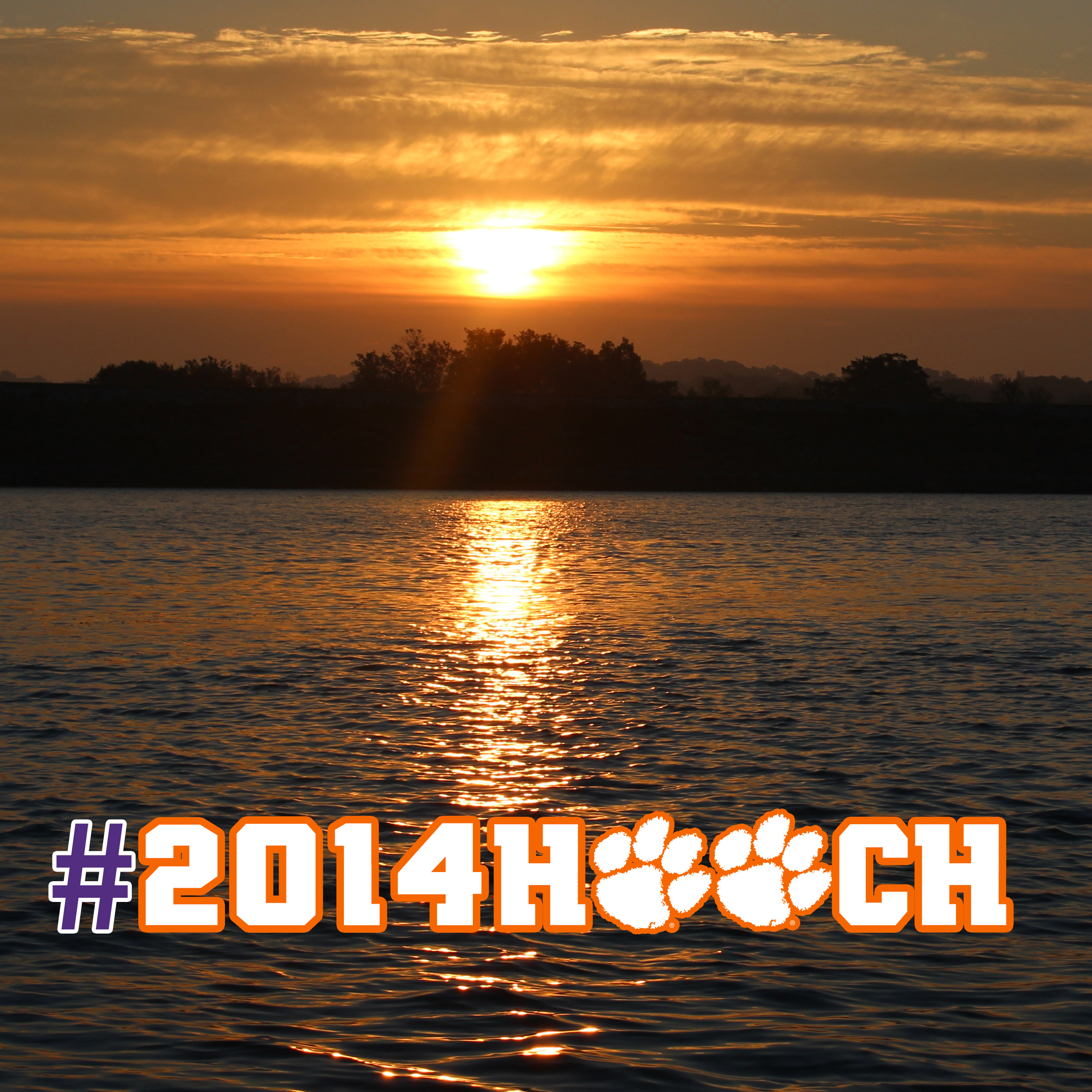 We left for Chattanooga, Tenn. this morning for the 2014 Head of the Hooch. As opposed to our Boston trip two weeks ago where only 16 rowers travelled, a more full squad of 35 rowers made the trip this weekend.

We arrived at the course a little after noon and went straight to practice. Fall was definitely in the air with a high of only 59 and howling winds steady over 20mph. Fitting, since it is Halloween and all. Regardless, we made due and had a very productive practice. All four boats, two varsity eights, a novice eight and a varsity four made the loops around the course on the Tennessee River.

After practice we returned to the hotel for team dinner and meetings. A coach Frazier Wong tradition, all members of the team paired up and we went around the room stating what each of us was thankful for and then something we’re looking from our teammate in the races this weekend. It’s really just a nice way to rewind after a long day and strengthen the bond of our Clemson family. Now though, it’s time to relax, we race tomorrow.

To say that today was interesting would be a vast understatement.

Despite high winds and cold temperatures at practice yesterday, as we went to bed last night we were under the full impression that we would be racing our full slate today. Well, that wasn’t the case. We awoke this morning to find out that the first 17 events of the day, up until 10 a.m. were cancelled and that the future races would be delayed. Because our first race wasn’t until after noon, we carried on our same race day routine, just a little later than expected. It then came to our knowledge that the Novice 8 wouldn’t race today which is unfortunate because we were really excited to bring them with us for the first time this fall.

Nevertheless, we arrived at the course ready to run. With the wind howling above 20 mph and temperature below 50 degrees, it was a bit nippy, but two of our eights prepared to race at 1:05 while two fours would go later in the afternoon. We were in the process of bringing the eights to the launch when a voice on came over the loudspeaker, “all races delayed” with the earliest possible return at 4 p.m. Then it was inevitable, all races for Saturday were officially cancelled.

The bad weather couldn’t dampen our spirits, however. The night concluded with game night in the hotel. With a four-station rotation going, many laughs were had in a semi-competitive environment. All in all, we had fun and that’s the name of the game.

As long as the weather cooperates, we will race tomorrow in our final day in Chattanooga. We compete in four events on the day with eight total boats in action.  Follow @ClemsonRowing on Twitter for all results.

After a disappointing day yesterday with all races being cancelled, we finally got to race today. The pent up energy was put to good use as we put together five top-10 finishes on the day. Overall, we competed in four events with eight total boats on the water.

Marissa Kump opened the day in the Women’s Championship 1x. She initially finished in third place but was assessed a buoy penalty to drop her down to fifth. With penalty time added, her total time came to 20:57.0. Anna Skochdopole meanwhile sculled in the Lightweight 1x and finished in fourth with a time of 22:24.4.

Clemson had four boats in the Women’s Open 2- and recorded a pair of top-10 finishes. Samantha Duggan and Aurelia Wurzel rowed to a second place finish with a time of 18:55.2 while Paula Wesselmann and Ashley Robinson finished eighth with a time of 19:45.4. The pairs of Stephannie Allen/Rebecca Kretzer and Dana Zielinski/Gaia Nencini finished 11th and 15th respectively.

We return to action in two weeks with the Rivanna Romp on November 16 from Charlottesville, Va. Until then, so long Tiger fans.