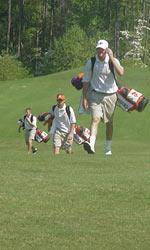 Biershenk won the Match Play Championship by defeating 33-year-old Taylor Hough at the Carolina Country Club of Spartanburg on Sunday. The win is the latest in Biershenk’s long list of awards and accomplishments.

A native of Boiling Springs, SC, Biershenk captured the South Carolina 4A high school championship a year ago and won the Region II-4A championship this past April.

His high school accomplishments began in 2000 when he won the Spartanburg County men’s amateur championship. He followed that up in June of 2001 by winning the Griffitts AJGA Junior championship at Furman University with an 8-under-par 208.

For the past two seasons, Biershenk’s game has really begun to flourish. He had the lowest stroke average in Region II the past two seasons. He was also named Boiling Springs’ team MVP each of the past two years. He was recently named Spartanburg County high school player-of-the-year for his efforts. In the latest SCJGA rankings, Biershenk was rated as the ninth best junior golfer in the state.

His brother played on four Clemson NCAA tournament teams under Larry Penley. Each team finished in the top 20 in the nation. He has played on the Buy.com tour for the past two years.