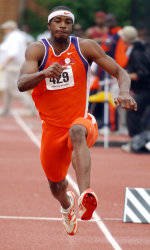 Clemson, SC – Senior triple jumper Jason Bell will be one of a handful of individuals competing this weekend at the Solid Orange Classic for the men’s track & field team. The meet is scheduled for Friday and Saturday at the Rock Norman outdoor complex.

Bell will compete in Saturday’s triple jump, which will be approximately 1:40 PM. He posted a regional-qualifying mark at the Clemson Invitational a week ago and won the event, but his jump was wind-aided. He hit a mark of 50’1.75″ last weekend, but is the school’s outdoor record-holder at 51’11.75″.

Andrew Porter and Travis Swaggard will compete in the 400m intermediate hurdles on Friday afternoon at 5:30 PM. Porter is two hundredths shy of a regional mark in that event, with a season-best time of 52.53 seconds. Swaggard’s best was a 53.43 at the Yellow Jacket Invitational.

In the distance events, four Tigers will compete in the 1500m. Tyrone Gayle, Jay Lumpkins, and Sean Reilly. Noble’s top time in that event so far this season has been 4:00.52. That event is scheduled Saturday at noon. Lumpkins will also compete in Friday’s 5000m run.

Matt Feiling is slated for Friday’s hammer throw at 6:30 PM and for the javelin, shot put, and discus during Saturday’s events.