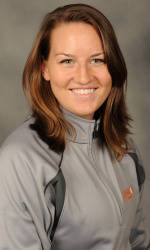 CLEMSON, SC – Senior Becca Brown was named to the Capital One Academic All-District 4 First Team on Monday. The senior team co-captain boasts a 3.87 GPA in bioengineering.

This is Brown’s first career Academic All-District honor, although she was a 2009-10 National Scholar. She was also named Academic All-ACC in 2010 and 2011. Earlier this season, Brown was named to the 2012 All-ACC team after the ACC Championships in April.