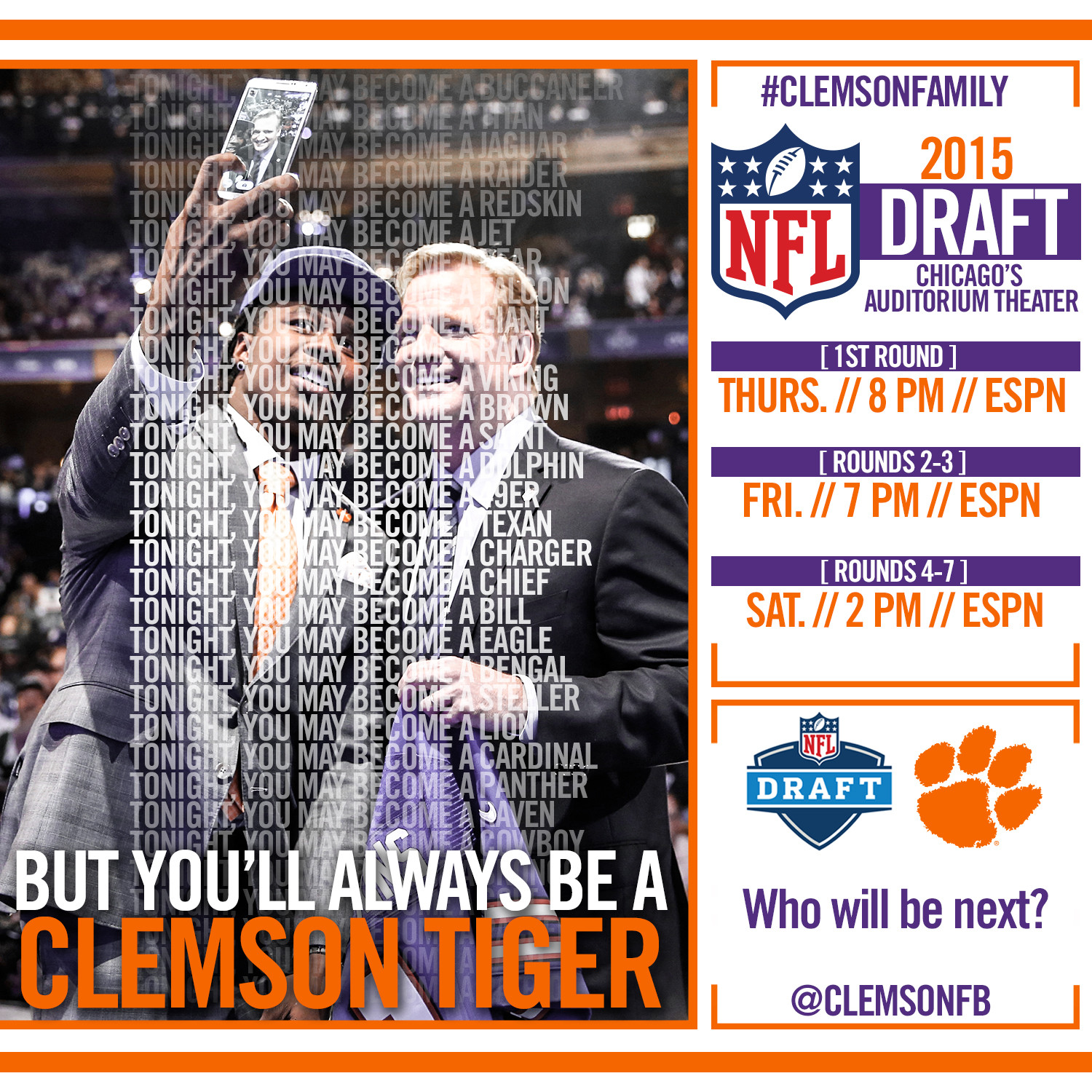 Beasley Should Give Clemson No. 1 Pick for Third Straight Year

Clemson, S.C.—Clemson defensive end Vic Beasley will be one of 28 prospects at the Auditorium Theatre in Chicago on Thursday evening as the National Football League begins its annual draft of college players at 8:00 p.m.   Beasley is one of many former Tiger football players who could be selected over the three days of the draft.

Eighteen of 22 mock drafts by various members of the media list Beasley as a top 10 pick, including seven who believe the Clemson graduate will be a top five selection.

If Beasley is taken within the first three selections he will be the highest draft pick in Clemson history.  Banks McFadden (1939, Brooklyn), Gaines Adams (2007, Tampa Bay) and Sammy Watkins (2014, Buffalo) were all the number-four selection of the NFL draft after their respective final seasons at Clemson.

Clemson has had a first-round draft choice each of the last two years.  DeAndre Hopkins was the No. 27 selection of the 2013 draft by the Houston Texans and Watkins was the No. 4 pick by Buffalo last year.

If Beasley is taken in the first round it would mark just the second time Clemson has had a first-round draft pick three years in a row.   The only other time it happened was in the 1997-99 era when Trevor Pryce (Denver, 1997), Anthony Simmons (Seattle, 1998) and Antwan Edwards (Green Bay, 1999) were first-round selections in three consecutive seasons.

Ten schools have had at least one first-round pick each of the last two years and thus have the opportunity to have a first-round pick three years in a row.  Those schools are Clemson, Texas A&M, LSU, North Carolina, Alabama, Florida State, Notre Dame, Florida, UCLA and Tennessee.

Seven Clemson players attended the NFL Combine last February, including six defensive players, more than any other school in the nation.  Those six seniors were a big reason Clemson led the nation in total defense for the first time since 1990.

In addition to Beasley, first-team All-ACC linebacker Stephone Anthony, first-team All-ACC defensive tackle Grady Jarrett and first-team cornerback Garry Peters went to Indianapolis for the combine and are likely to be drafted this weekend.   Many mock drafts have Anthony as a second-round pick and Jarrett as a third-round selection.

Defensive ends Tavaris Barnes and Corey Crawford were at the combine and are likely to be selected at some point over the three-day process.  Punter Bradley Pinion also went to the combine.

Other Clemson seniors who could be drafted include linebacker Tony Steward, and defensive tackles DeShawn Williams and Josh Watson.  Robert Smith, the leading tackler in Clemson’s secondary last year, is a senior safety who could be chosen as well.  Offensive players Adam Humphries, David Beasley, Kalon Davis and Cole Stoudt are candidates for the draft as well.

Since Dabo Swinney became Clemson’s head coach the Tigers have had 28 players selected, tied for second among league schools.  Florida State has the most with 29, followed by Clemson and North Carolina with 28, Miami (FL) with 24, Virginia Tech with 17, Pittsburgh and N.C. State with 14, Syracuse and Georgia Tech with 13.

•Clemson has had 24 NFL first-round draft picks in its history.   (NFL records do not consider Harvey White a first-round draft choice in 1960 as it was an AFL selection).  Each of the last three Clemson players taken in the first round have been offensive players.  The last defensive player taken in the first round was the late Gaines Adams, the No. 4 selection of the draft by the Tampa Bay Bucs.

•Thirty former Clemson players were on NFL rosters last year and 26 got into an NFL game, more than any other season. Four were on practice squads or injured reserve.

#Has Beasley drafted by Washington in a trade