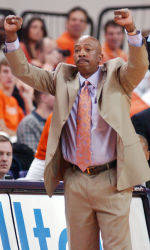 Basketball to Face Minnesota in ACC vs. Big Ten Challenge

The eighth Annual ACC vs. Big Ten Challenge could come down to the Clemson vs. Minnesota game on Wednesday, November 29th. That will be the final game of the 11 contests in the challenge series that will be played between November 27-29 at various campus sites.

Clemson will take on the Gophers in Williams Arena in Minneapolis, MN in a game that will be televised nationally on ESPN2. Tip-off is slated for 9:30 PM eastern time.

This will mark the second straight year that Clemson has had to go on the road for the ACC vs. Big Ten Challenge. Clemson and Miami (FL) are both in that situation this year, marking just the second and third times an ACC team has had to play on the road in consecutive years. Georgia Tech had back-to-back road games in the Challenge in 2002 and 2003.

Clemson has a 5-2 record in its seven previous ACC-Big Ten Challenge games, tied for third best among ACC teams. Duke has a 7-0 record in its previous seven appearances, while Wake Forest is 6-1. Clemson and Florida State are both 5-2. Last year Clemson defeated Penn State in State College, PA.

This will be the sixth meeting between Clemson and Minnesota. The Gophers have a 4-1 lead in the series. Clemson’s only win came at Littlejohn Coliseum in 1995-96 by a 79-66 score. The two schools met twice in the 1996-97 season, a year Clemson advanced to the Sweet 16 of the NCAA Tournament. Minnesota downed Clemson 75-62 in the championship game of the San Juan Shootout in Puerto Rico in November, then the Gophers stopped the Tigers 90-84 in double overtime in the third round of the NCAA Tournament in San Antonio, TX.

Minnesota had a 16-15 record last year and advanced to the second round of the NIT. They defeated Wake Forest in the first round at home, 73-58, before losing at Cincinnati in the second round, 76-62.