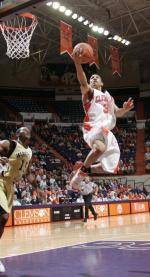 Basketball Takes to the Road Against Virginia on Saturday

Clemson opened its ACC slate with a 61-55 win over FloridaState last Wednesday. It marked the first time since the 1997-98season that Clemson won its first ACC game of the year. Clemsonwill attempt to win its first ACC road game of the year when theTigers take on Virginia in Charlottesville on Saturday. Clemson hasnot won its first ACC road game of the year since 1996-97 when theTigers won at Virginia. Clemson is just 8- 44 lifetime in its firstACC road game of the year. Clemson will attempt to start 2-0 in theACC for the first time since the 1996-97 season when the Tigersstarted a record 5-0 to open the ACC schedule. Clemson has been 2-0or better in the ACC just five times in history, all between1979-80 and 1996-97. Clemson is off to a 12-2 start, its best startsince the the 1996-97 season when Clemson started 13-1 through itsfirst 14 games. That Clemson team actually started 16-1. This isjust the seventh start of 12-2 or better in Clemson history.Clemson leads the ACC in steals and ranks second in blocked shots.Though stats of January 3 Clemson and Alabama A&M were the onlytwo teams in the nation to rank in the top 20 in both blocked shotsand steals. Clemson defeated Florida State 61-55 in its most recentgame even though the Tigers made just one field goal over the last13:38 of the contest. That was a three-point shot with 8:10 to goby Cliff Hammonds. Clemson used a strong rebounding game to gainthe victory over Florida State. The Tigers won the carom collectionstat 42-28, including a 16-7 advantage in offensive rebounds. Pointguard Vernon Hamilton, a native of Richmond, VA, is Clemson’sscoring leader with a 11,9 average. Hamilton is shooting 49 percentfrom the field He entered the season with a 40.4 percent field goalpercentage. Hamilton is trying to become the first Tiger guard toshoot 50 percent or better over the course of a season sinceMichael Tait shot .517 in 1986-87. Clemson will be without theservices of 6-9 power forward James Mays for the rest of theseason. The sophomore was declared academically ineligible for thesecond semester prior to the Georgia game on December 28. He wasClemson’s top rebounder with a 7.6 average through the first 11games of the season, all Clemson victories. Shawan Robinson has 25three-point goals and 165 for his career. He needs just three to gopast Chris Whitney (167) into third place on the Clemson careerlist. Robinson made his first start of the season in the win overFlorida State and led Clemson in scoring with 12 points.