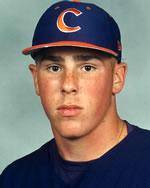 Clemson vs. Gardner-Webb Clemson (2-3), ranked as high as #18, will play host to Gardner-Webb (5-6) Wednesday at Doug Kingsmore Stadium. The game will start at 4:00 PM and be broadcast live on the radio by WCCP, 104.9 FM out of Clemson. Live stats will also be available on Clemson’s website.

The Series vs. Gardner-Webb Clemson and Gardner-Webb have met just once on the diamond. Clemson defeated Gardner-Webb 9-6 on March 1, 1975 at Doug Kingsmore Stadium. In that game, future Major Leaguer Denny Walling was 3-for-4 with a homer and double. Also playing in that game was former Tiger pticher and current Tiger play-by-play announcer Bob Mahony. Mahony pitched the final 4.0 innings, allowing just two hits, two walks, and one run to earn the save in the season opener. He also struck out six Bulldogs. Head Coach Jack Leggett has never faced the Bulldogs.

The Starting Pitchers Gardner-Webb will start senior righthander Abraham Gonzalez (1-2, 4.61 ERA). The Miami, FL native has allowed just a .234 opponents’ batting average and struck out 13 in 13.2 innings pitched this year. It will be his second start and fifth appearance of the season.

Clemson will counter with freshman righty P.J. Zocchi (0-0, 0.00 ERA). In two relief appearances, the Bronx, NY native has allowed two hits, no runs, and no walks while striking out five.

Clemson Overview Clemson enters Wednesday’s game after a 2-2 showing in the Keith LeClair Invitational over the weekend. The Tigers beat Georgia Southern twice, but fell twice to host East Carolina. Brad McCann leads the Tigers with 11 hits in 22 at-bats, while the team is hitting .235. Fourteen different Tigers have already seen at least one start in the field. The Tigers also sport a 2.33 ERA and .970 fielding percentage.

Tigers Split Games in Keith LeClair Invitational Clemson went 2-2 in the inaugural Keith LeClair Invitational at Greenville, NC from February 28-29. The Tigers defeated Georgia Southern by scores of 4-0 and 9-0, but fell twice to East Carolina by scores of 3-2 (11 innings) and 6-4. Clemson started and finished four games in the span of just 28 hours.

109 That was the number of minutes it took to complete Clemson’s 4-0 win over Georgia Southern at Greenville, NC on February 28. Doug Kingsmore Stadium. That game also lasted 109 minutes.

Tigers Sporting a 2.33 Team ERA Despite the team’s 2-3 record, Clemson’s pitching staff has been impressive in the early going. Clemson has a 2.33 team ERA and is holding opponents to a .232 batting average. The staff also has 47 strikeouts against only 14 walks (3.36 ratio) and already has two team shutouts. Sophomores Jason Berken have been especially good, as he has yet to allow a run in 6.0 innings.

Two-Way Tigers In recent years, Clemson has not had many players both pitch and play in the field. But this season, three Tigers have already seen action in both roles. Kris Harvey has also started two games on the mound, while starting two others at first base. And Collin Mahoney, who never pitched in college before this year, has been impressive in his two outings on the mound in 2004. He struck out four in just 1.2 innings pitched at East Carolina on February 28. He is also 1-for-4 at the plate this year.

McCann Had a 22-Game Hitting Streak Junior third-baseman and preseason All-American Brad McCann ended the 2003 season on a 20-game hitting streak. The streak carried cover to the 2004 season, where he extended it by two games before it came to an end at East Carolina on February 28. During his 22-game hitting streak, the Duluth, GA native hit .410 (41-for-100) with 21 RBIs.

McCann’s streak tied for the fifth longest in Clemson history. The Tiger and ACC record-long hitting streak is 41, set by Rusty Adkins from April 10, 1965 to May 17, 1966. Adkins’ streak also started in one season and ended in the next.

Ingram Goes Deep in First At-Bat Red-shirt freshman and utility player John Ingram stepped onto a college baseball field for the first time against Georgia Southern on February 29 (at Greenville, NC) and promptly did what few can say they did. He belted a long three-run home run, well over 400 feet, over the centerfield fence in his first career plate appearance. The homer came on an 0-1 pitch, as he took the first pitch for a strike. Therefore he hit the homer in his first career swing.

1954 Tiger Team to Hold Reunion The 1954 Clemson baseball team, who won the first ever ACC baseball title, and many of the players on that team will be in attendance for Clemson’s game against N.C. State on April 24. The 50th anniversary of the team’s title will be commemorated during pregame festivities. Not only did that team win the first ever ACC regular-season baseball title, it was the first Clemson sport to win anACC championship. Among the players on the team include former Major Leaguer Billy O’Dell and Doug Kingsmore, an All-ACC player who hit 10 homers in just 24 games in 1954.