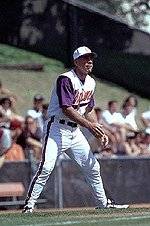 Clemson vs. Charleston Southern Clemson (28-16), ranked as high as #13, will play host to Charleston Southern (20-24 entering its game at Wofford Tuesday) Wednesday at Doug Kingsmore Stadium. First pitch is scheduled for 7:15 PM. The game will be broadcast live on the radio by WCCP, 104.9 FM out of Clemson. Live stats will also be available on Clemson’s website at ClemsonTigers.com.

The Series Clemson and Charleston Southern have met 13 times on the baseball diamond, with the Tigers winning all 13 games dating back to the 1976 season. The two teams last played in 2003, a 5-0 Tiger win in 71/2 innings at Clemson in which the Tigers used eight different pitchers. The last seven games in the series have been played at Doug Kingsmore Stadium. The Tigers lead 10-0 in games played at Clemson, all of which have been played at Doug Kingsmore Stadium. Jack Leggett is 7-0 against the Buccaneers as Clemson’s head coach.

The Starting Pitchers Charleston Southern will start junior lefthander R.J. Swindle (6-4, 3.66 ERA) Wednesday. The Orlando, FL native has made 12 starts and one relief appearance for a total of 86.0 innings pitched. He has allowed 86 hits and 22 walks and struck out 93. He allowed six hits and two earned runs with 10 strikeouts in 6.0 innings pitched at Clemson in 2003. The Tigers will counter with sophomore righty Kris Harvey (6-0, 4.78 ERA) on the mound. The Catawba, NC native has started 10 games, but has not pitched since he started against The Citadel on April 20. In 43.1 innings pitched, he has allowed 44 hits and 28 walks while striking out 36.

Charleston Southern Overview Charleston Southern, led by eighth-year Head Coach Gary Murphy, enters Wednesday’s game coming off a three-game sweep at Virginia Military over the weekend. The Buccaneers will play at Wofford Tuesday before playing at Clemson Wednesday. Charleston Southern is 20-24 overall and 7-8 in the Big South. The team is also 9-15 on the road in 2004.

Charleston Southern’s pitching staff has a 5.84 ERA and .295 opponents’ batting average. Five different Buccaneers have accounted for the team’s seven saves. The team is also fielding .951.

Clemson Overview Clemson enters the game against Charleston Southern after falling twice in a three-game series against #24 Florida State from Saturday to Monday. The Tigers have still won 19 of their last 25 games and 15 of their last 17 at home. Clemson is 28-16 overall and 12-6 in ACC play, good for second place in the ACC standings.

The Tiger pitching staff has a 4.18 ERA and .259 opponents’ batting average. Patrick Hogan has a 2.57 ERA and nine saves to lead the bullpen. Clemson is also fielding at a .966 mark.

Seminoles Take Two of Three From Tigers Florida State won the first two games of the series, but Clemson salvaged the series with an 18-9 win in three games from May 1-3 at Doug Kingsmore Stadium. Clemson hit .287 in the series thanks to 18 hits in the final game. Andy D’Alessio was 4-for-9 with a double in the series. Clemson also stole seven bases thanks to five on Monday.

In game one, Florida State scored 10 unanswered runs to defeat the Tigers 11-6. Clemson held a 6-1 lead after three innings, but a six-run fourth inning and four more runs led the Seminoles to the win. The loss was Clemson’s first in its last 15 games at home. Florida State overcame six errors, thanks in part to the superb pitching by Rhett James. James relieved an injured Hunter Jones in the first inning and allowed just one earned run and four hits in 8.2 innings pitched to record the win. Kris Harvey and Lou Santangelo had two hits apiece, as the Tigers hit eight singles in the game.

In game two, Florida State scored 10 unanswered runs against to down the Tigers 10-1. After Russell Triplett singled home Santangelo in the second inning, Florida State scored in six of the final seven innings. Stephen Drew and Aaron Cheesman each hit home runs, while the Seminoles had 15 hits in all. Freshman lefthander Brian Schultz, who was making his first start of his career, pitched 6.1 innings, allowing just one run, one walk, and five hits to earn the win. Robert Rohrbaugh suffered the loss. Triplett led the Tigers with two of the team’s five hits. The Seminole defense was spectacular, committing no errors and turning three double plays. The outfieders, in particular Shane Robinson in centerfield, took away several Tiger hits with running catches. The defeat meant is was Leggett’s third series loss in 44 ACC home series as Clemson’s head coach. The game had a 43-minute delay at the start and a 92-minute delay in the first inning due to inclement weather.

In game three, an 11-run second inning led the Tigers to an 18-9 win Monday. The 11-run inning was the most runs ever scored by Clemson in the second inning. The Tigers, who did not have an extra base hit in the first two games, hit six doubles and three homers in game three. Eight Tigers scored at least two runs and seven had at least two RBIs. Colvin tied a school record held by many with three doubles in the game and had a career-high four hits and three RBIs in the contest. Brad McCann’s, Santangelo, and John Ingram all hit homers for the Tigers.

Tigers #11 in RPI The only rating system the NCAA uses to determine selections and seedings is the RPI, or the Ratings Percentage Index. Although the NCAA does not release its official RPI, Boyd Nation has come up with an RPI index that is all but the same as the official RPI. He uses numbers from previous seasons to verify his formulas.

In the May 3 release (listed at BoydsWorld.com), his RPI index has Clemson #11. The Tigers play one of the toughest schedules in the nation during the 2004 season. Clemson can thank a tough non-conference schedule for its high RPI ranking. The RPI only counts games against Division I teams and is for games through May 2.