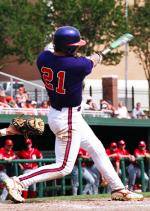 Clemson vs. UCF Clemson (29-16), ranked as high as #13, will play host to #24 Central Florida (35-10) this weekend in a three-game series at Doug Kingsmore Stadium. Game times are 7:15 PM (Friday), 7:00 PM (Saturday), and 2:00 PM (Sunday). All three games will be broadcast live on the radio by the Clemson Tiger Sports Network and can be heard live via the internet at ClemsonTigers.com. Live stats will also be available on Clemson’s website for all three games.

On both Friday and Saturday, it will be “Little League Night.” All youngsters who wear their little league uniforms will receive free admission. Then on Sunday, all ladies will receive free admission on Mother’s Day. Also, all ladies will be allowed on the field to stand next to their favorite Tiger during the National Anthem. Sunday’s game will also be “Senior Day,” as Clemson’s five senior players (Zane Green, Patrick Hogan, Ryan Hub, Steven Jackson, and Russell Triplett) and senior Josh Runion, the team equipment manager, will be honored before the game.

The Series Clemson and UCF have met just twice on the baseball diamond. The series is tied 1-1. Clemson defeated the Golden Knights 7-6 on February 7, 1998 in the Olive Garden Classic at Kissimmee, FL. The Golden Knights won 5-0 in the ACC Disney Blast in Lake Buena Vista, FL on January 30, 2000. No current Tiger has ever played against the Golden Knights.

The Starting Pitchers In game one, UCF will start junior righthander Matt Fox (10-1, 1.48 ERA) on the mound. The Coral Springs, FL native has made 12 starts for 79.0 innings pitched. He has allowed just 52 hits and 23 walks while striking out 93. He is also holding opponents to a .181 batting average and has five complete games to his credit.

The Tigers will counter with sophomore lefthander Robert Rohrbaugh (3-3, 3.08 ERA) Friday. The Littlestown, PA native has made seven starts and seven relief appearances for a total of 49.2 innings pitched. He has allowed 47 hits and 13 walks while striking out 26. He has also not allowed a home run in his career (79.1 innings pitched).

In game two, the Golden Knights will start sophomore righty Kyle Bono (7-0, 1.23 ERA). The Lake Mary, FL native has started 11 games and relieved in two others. In 73.1 innings pitched, he has allowed just 45 hits and 19 walks while striking out 85. He is also holding opponents to a .173 batting average and has five shutouts to his credit.

Clemson will counter with junior lefty Tyler Lumsden (3-2, 4.15 ERA) Saturday. The Roanoke, VA native has started nine games and has pitched 52.0 innings. Lumsden has allowed 53 hits and 26 walks while striking out 56. He also has made one relief appearance.

In game three, UCF will send out junior righthander Darren Newlin (2-0, 1.38 ERA). The Tallahassee, FL native has made two starts and 10 relief appearances for a total of 39.0 innings pitched. He has allowed 26 hits and 22 walks while striking out 27. Newlin has two saves and has allowed just three extra base hits.

The Tigers will counter with senior righthander Steven Jackson (3-2, 3.55 ERA) on the mound Sunday. The Summerville, SC native has started two games and relieved in 15 others. In 33.0 innings pitched, he has allowed 28 hits and 13 walks while striking out 22. He is also holding opponents to a .220 batting average this year and has an 18-7 career record in four seasons.

UCF Overview Central Florida, led by 22nd-year Head Coach Jay Bergman, enters the series coming off a 6-0 win over South Florida Tuesday. The Golden Knights also took two of three games against Troy State over the weekend and have allowed one or no runs in six of the last eight games. Central Florida is 35-10 overall and 19-5 in the Atlantic Sun Conference.

The team, which is 13-4 on the road, is hitting .309 with 16 homers in 45 games. Dee Brown is hitting a team-best .396 with four homers and 48 RBIs. Clay Timpner is hitting .361 with four home runs and 32 stolen bases in 36 attempts. He is the major reason the team has stolen 76 bases this year. Other than Brown and Timpner, no Golden Knight has more than two homers.

The strength of UCF is its dominant pitching staff. Entering this week’s play, the team was fourth in the nation in ERA. After the shutout win over South Florida, the team ERA stands at 2.76. The Golden Knight rotation for the series has a combined 19-1 record and 1.36 ERA in 191.1 innings pitched this season. The staff as a whole is also holding opponents to a .224 batting average. Central Florida is fielding at a .965 clip as well.

Clemson Overview Clemson enters the series against UCF after a thrilling 3-2 come-from-behind win over Charleston Southern Wednesday. The Tigers have won 20 of their last 26 games and 16 of their last 18 at home. Clemson is also 7-2 on its current 14-game homestand.

The Tiger pitching staff has a 4.13 ERA and .257 opponents’ batting average. Patrick Hogan has a 2.57 ERA and nine saves to lead the bullpen. Clemson is also fielding at a .966 mark.

Tigers Rally to Beat Charleston Southern 3-2 Clemson scored three runs in the bottom of the ninth inning to defeat Charleston Southern 3-2 on May 5 at Doug Kingsmore Stadium. The Buccaneers scored two runs in the third inning and held a 2-0 lead until the ninth inning. After the Tigers hit many balls hard with nothing to show for it all night, all five batters in the ninth inning had hits. Brad McCann’s and double by Lou Santangelo, Travis Storrer bounced a single over the shortstop for the walkoff, game-winning hit. The Tigers had just four hits in the first eight innings. Josh Cribb pitched 3.1 hitless and scoreless innings of relief to earn the win. The Buccaneers stole six bases in the game as well. Sipp had a game-high two hits to lead the Tigers’ nine-hit attack.

Berken Out for Rest of 2004 Sophomore righthander Jason Berken, who had gone his last 23.0 innings pitched without allowing an earned run, will miss the rest of 2004 due to damaged ligaments in his throwing arm. After visiting with the world-renowned Dr. James Andrews in Birmingham, AL in early May, it was decided to go ahead with “Tommy John” surgery in mid May to repair the ligaments. He had only pitched 1.0 and 3.0 innings in his last two starts, both times on pitch counts. However the pain that caused him to miss two starts in April did not subside, and Berken had an MRI done on his arm. Berken hopes to rehab and be ready for the 2005 season. He was 5-1 with a 2.09 ERA in 2004. He also held opponents to a .156 batting average and struck out 37 in 38.2 innings pitched (eight starts).