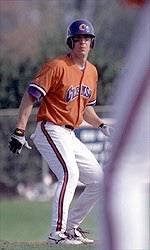 CLEMSON, S.C. – Thanks to 15 hits and 12 walks, #8 Clemson defeated Ohio 16-2 Sunday at Doug Kinsgmore Stadium. The Tigers completed the three-game sweep with the win. The game, which started on Saturday and was postponed due to inclement weather, resumed in the third inning Sunday with the score tied 1-1. Clemson runs its record to 13-1 on its current 23-game homestand.

Clemson (15-2) was led by outfielder Justin Singleton, who went 3-for-5, including a triple and four RBIs. Singleton entered the game 1-for-28 in 2000. Khalil Greene also tallied three hits and Jeff Baker went 2-for-5 with three RBIs. Matt Reed and Ryan Kyes led the Bobcats (3-7-1) with two hits apiece.

Ryan Mottl pitched the 2.1 innings on Saturday and did not return Sunday, as freshman righthander Jarrod Schmidt was on the mound when the game resumed. Schmidt (1-0) earned his first career win by pitching 4.2 scoreless innings. He allowed three hits and three walks while striking out six. He lowered his ERA to 1.23 in 22.0 innings this season. Mike Proto and Justin Lombardi each pitched an inning to close out the game.

Ohio took a 1-0 lead in the first inning when Matt Reed led off with a double and scored on an RBI single by Cory Keylor. Clemson answered in the bottom of the inning when Michael Johnson brought home Ryan Riley on a sacrifice fly.

After scoring a run in the third, Clemson added two runs in the fourth inning to up its lead to 4-1 when Baker drove home two runs on a single.

In the sixth, Clemson plated four runs thanks to four Bobcat walks. Three more runs scored in the seventh. Greene, Brian Ellis, and Justin Singleton each had RBI singles in the inning.

Ohio added a run in the eighth on an RBI groundout by Scott Brownlee.

Both teams squandered many more scoring opportunities, as Clemson left 14 runners on base while Ohio left 11. In the three games, Ohio stranded 34 runners on base, while only scoring seven runs. The Bobcats entered the series averaging nearly nine runs per game.

Clemson will next play host to East Carolina Tuesday at 3:00 and Wednesday at 7:00. The Wednesday game will be televised by Fox Sports Net South.