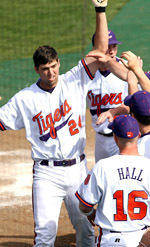 The broadcasts will begin 15 minutes prior to the start of each contest, and will have comments and strategies from Clemson Head Coach Jack Leggett. The games are subject to be tape delayed based on schedule conflicts with Tiger basketball games.